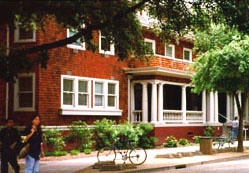 North Hall was one of the three original dormitories (with South Hall and West Hall) on the UC Davis campus, and was finished on September 6, 1908. It was the second building built on the University Farm, a year after the dairy barn was erected.

It is home to the Women's Resources and Research Center (aka the Women's Center) and UC Davis Counseling and Psychological Services (CAPS) (which used to be known as the Student Counseling Center (SCC)).

Davis offers a wide variety of Counseling and Psychological Services for students and non-students alike.