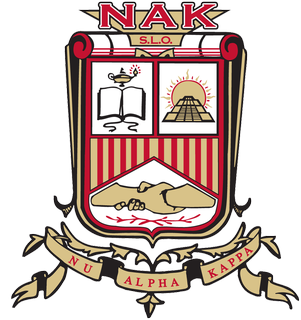 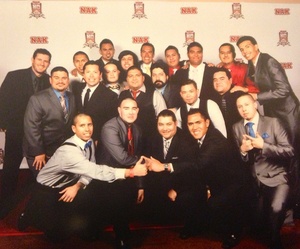 Often referred to as "NAK", Nu Alpha Kappa was founded on February 26, 1988 on the campus of California Polytechnic State University, becoming the first Latino-based fraternity at that campus. Currently, NAK is composed of twenty-four established chapters across California, Nevada, and Colorado. Nu Alpha Kappa was a charter member of the National Association of Latino Fraternal Organizations (NALFO), but is now a member of the North-American Interfraternity Conference.

"Xinaco", a Nahuatl word used by the Olmecs, describes an educated, amiable individual whose personality and charisma transcends and enlightens all cultures and social classes. The "Xinacos" (CHI-Na-Kos) meeting resulted in the creation of a new fraternity. The dynasty began with an invitation to a meeting that took place on February 26, 1988. Fifteen good friends, the so-called Nacos, which is a Spanish slang word for someone who gets along well with everyone, would mark the beginning of a better social environment at Cal Poly, San Luis Obispo.

The Nacos got together to express their ideas and to demonstrate that they were part of Cal Poly. They were enthusiastic about starting a club to help Hispanic students overcome the culture shock experienced when arriving at a predominantly Anglo University. As time went by, each member began to see the excitement the other members began to develop towards the club. They decided to seek fraternity status.

The Nacos knew that this process would take a lot of time and effort. Unfortunately, four members were unable to hold this commitment and decided to drop out. The remaining eleven members decided to go forward and adopt the word "Naco" to the Greek fraternity system. Later, the "Nacos" would be known and identified as "NU ALPHA KAPPA," or "NAKS" for short. Although NAK chose to integrate into a Greek system, they also decided to focus on brotherhood and unity through a commitment to maintain their Latino culture.

Being the first Latino fraternity in the history of the university put pressure on every member of NAK, especially since there had been attempts in the past to start a fraternity and failed. Therefore to make this attempt succeed, NAK concluded that their goals would be as follows:

We, NU ALPHA KAPPA, seek to unite and involve all students in a more harmonious and brotherly atmosphere through academic, social and cultural means. There is a need to interface the various backgrounds that constitute the student body of Cal Poly in order to improve relations amongst all students and the community in San Luis Obispo.

The origins of Nu Alpha Kappa Fraternity, Inc. Kappa Chapter lay in the fall quarter of 1995 at the University of California at Davis. Roberto Felix, Raul Lopez, Jason Francis, Juan Alderete, Sigifredo Juarez, and Alex Gonzalez, met and became friends in Casa Cuahtemoc, a theme house that promotes the Chicano/Latino Culture in the Tercero Housing Area. As the quarter progressed, this group of young men along with Ivan Chaidez a friend living out side of CASA started looking to the Chicano/Latino organizations on campus so that they could help give back to the community. However, after reviewing their options and considering whether or not to join an organization, they felt that they had not found an organization that fit their needs.

These young men learned of Nu Alpha Kappa Fraternity, Inc. through family members in the organization. Ivan and Sigifredo both had cousins that were a part of NAK. From these family members, the group was given a good idea of what NAK represented and furthermore, the young men felt that NAK offered a great opportunity to join something that represented and encompassed their ideals of cultura, carnalismo, y educacion.

The following year, the seven men resumed discussion about chartering a chapter of Nu Alpha Kappa Fraternity, Inc. Now however, Manuel Vasquez and Luis Mora joined the group. Before they knew it, they were taking the necessary steps to become a part of the NAK familia. Upon meeting the brothers of Nu Alpha Kappa and learning more about the organization, they felt that they were ready to begin the process of chartering a chapter of NAK.

First however, they became an official organization on campus. So on January 27, 1997, the gentlemen met for their first official meeting. This group of men came to be known as Ollin (Nahautl for movement) Raza Avanzando La Educacion or better known as O.R.A.L.E. On February 4, 1997 O.R.A.L.E became a recognized student organization by the University of California at Davis. Soon there after, O.R.A.L.E. began to get involved in the community and strive to become more visible on campus, whether through community service events or fundraisers, the group was showing the enthusiasm that had lead them to becoming an interest group.

They began to mature as an organization and learned how to effectively run an organization. From the financial responsibilities to the social and educational aspects of school life, they learned how to balance the two and quickly became recognized as one of the leading organizations on the Davis campus. Soon thereafter, the Chicano/Latino community started noticing the work and dedication of this new organization. At this time, in the middle of winter quarter, was when O.R.A.L.E. admitted it last two members, Omar Peña and Eduardo Rivera.

The National Marrow Donor Program (NMDP), created in 1986, is a non-profit organization based in Minneapolis, Minnesota. Its mission is to extend and improve life through innovative stem cell therapies.

By incorporating these values, the National Head Program and Nu Alpha Kappa Fraternity, Inc. aspire to set a standard of excellence nationwide that rewards our recipients, donors, volunteers, and communities.

"Our community moving forward with conocimiento, corazon, y conciencia." The Chicana(o)/Latina(o) Bienvenida is an annual event put on by The Department of Chicana/o Studies, Student Recruitment & Retention Center, Educational Opportunity Program, and UCD Chicana/o Latina/o Student Organizations including NAK. This event is put on to welcome incoming students to the campus and warmly introduce them to the many resources, organizations, places, and people that can help out with college life. Held every year immediately prior to the start of the Fall Quarter make sure to come out and support whether you are a new or returning student.

NAK has been a participant on Picnic Day at UCDavis for the past 13+ years. Known throughout the entire campus and the region for our famous NAKos Tacos. We grill over 250 lbs. of meat and serve it with some tasty refreshments at a price that can't be beat. Every year we spend weeks preparing for the event in order to compete in and win Best Picnic Day Booth. Which we have done for the past 13 years. So when Picnic Day rolls around make sure you get out to the Quad at UC Davis for some of the tastiest tacos around!

For the past 14 years we have been hosting at-risk junior high students from the community in order to motivate them to make it to college. We include a campus tour, workshops, games, food, and transportation. We have met success with this program as we have seen many of our participants go onto college including UC Davis.

For the past 4 years we have been mentoring students at the local Holmes Junior high school. We offer workshops, homework tutoring, and an open ear to the participating students. This program has been recognized by the Yolo County District and won the 2012 Excellence in Education Award.

The Hombre-a-Hombre (man-to-man) Conference is an extension of our Holmes mentoring program. Over the past decade we have been offerring a day of fun and education to the local latino youth. We offer them a campus tour, workshops, a student panel, sports, bowling, and food. This is meant to further give them a sense that they are welcome on a campus where latinos are a minority.

This event is a reenactment of Mary and Joseph's search for a place to stay in Bethlehem. (Where the Christ child was later born). We invite the local community to join us in this timeless tradition. We offer our guests toys for kids, pan dulce (sweet bread), hot cocoa, pinatas, and a live mariachi. Posada Navidena is always great fun and a heartwarming success so make sure to attend this annual Fall event.

This event was the first club party hosted by a Greek Organization in the Sacramento region back in the Fall of 1997. Since then, this Fall event has always reached capacity and had 1000+ attendees. Host Dj's have ranged from Dj Felli Fel to The WestCoast's #1 Latino Dj Eddie One of the Heavy Hitters.

A joint event by the UC-Davis Kappa Chapter & the CSU-Sacramento Iota Chapter Brothers. This party always maxes out capacity and uses the most exclusive venues in the area. Fully-stocked bars and Tamborazo included. The most recent "5-Story Party" held in February 2013 reached a capacity of nearly 1300 and had to turn away would-be attendees. The #1 Party of the Winter Quarter, make sure not to miss out and purchase your presale ticket in advance to guarantee entry. Because as you should know, there ain't no party like a NAK party.

A recent traditional Party. We host this event for all of the latino Community that likes to recognize the Independence of Mexico. Held as close to cinco de mayo as possible. Whether you are just trying to relax or looking to unwind, we invite you to join us on this joyous event. Fully stocked bars and some of the best local Djs, come dressed to impress because you should already know: ain't no party like a NAK party.

Nu Alpha Kappa Fraternity, Kappa Chapter has been the recipient of numerous awards including: Best New Organization, Organization with the highest GPA, Best Picnic Day Food Booth the past 8 years in a row, Kaplan Award for Outstanding Teamwork, and has been the recipient of the UC Davis Human Corp Community Service Award for 13 years and counting. The only Fraternity from UC Davis to be officially recognized by the City of Davis and Yolo County School District. Distinction of being the first UC Davis Organization to host a Club Party Fundraiser.

MEN OF MIND | MEN OF CULTURE | MEN OF PRIDE

NAK at UC Davis can be contacted by e-mail: [email protected] or by visiting Facebook: http://www.facebook.com/davis.nakos Online: http://www.davisnakos.org