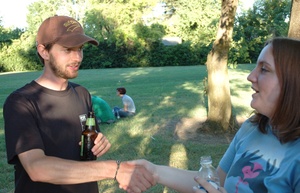 There was a Davis Wiki BBQ/Gathering on June 26 at Slide Hill Park, jovially titled the OMG(LOL|WTF)WIKIBBQ. (Source of 'OMGWTFBBQ')

Many foods were eaten and words were said. There will be a sequel to this barbecue someday. Hooray internet!

Folks who were there

(Add yourself if you went and aren't on here, obviously...)

Total participation at the BBQ's peak was around 35 WikiGnomes.

Some of Phil's picture are here. (I'll move a couple of the best over to this page. —PhilipNeustrom)

YawenChen, TravisGrathwell, TimJarratt, and (please add as I've got another photo just of her for her page)