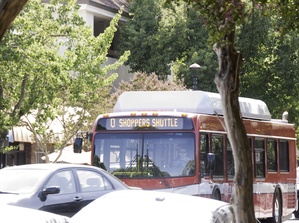 As seen on third and D St., downtown Davis

The Unitrans O Bus Line is a shuttle that intends to let riders get their shop on from most student housing locations, including West Village. It is the only bus (and the Z line) that will drop you in front of Target.

The O line was created for freshmen and other students living on-campus as an way to get to popular shopping centers around Davis. It roughly overlaps the A line, C line, E line, and V line, as these particular routes are not serviced on the weekends

It began on January 30th, 2010 and now operates all weekends and certain holidays, except during Saturdays with Finals Service. See Schedule and Map at Unitrans website.

As of August 8th 2015, O-line Shoppers Shuttle to be revised to start and end at MU with a loop to serve Anderson-8th-Sycamore and then via LaRue-Dairy-Hutchison.  The O-line would also be modified to run eastbound via 2nd Street between L and Cantril to improve its on-time performance. The weekend service will also be extended until 6:10 pm. 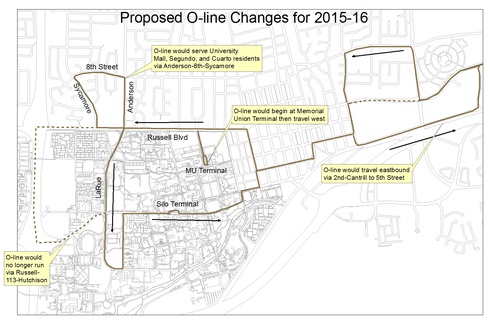