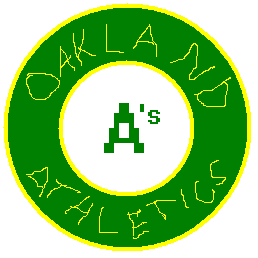 The Oakland Athletics, or A's for short, are the official Major League Baseball team of Oakland. Loyal A's fans can take public transportation to the games, as BART pulls directly up to the Oakland Coliseum. If you're into the whole SF Giants thing, there is a bit more walking involved, but BART goes there too.

Getting to the Coliseum from Davis is pretty easy. You can just take the Capitol Corridor from Davis to the Coliseum station (on a San Jose-bound train), or you can just transfer at Richmond to BART which will take you there also. The A's have a AAA team in West Sacramento, just outside of Davis. The team is the Rivercats. The Rivercats players get sent to the A's if they preform well. The A's have won the championship four times since moving to Oakland in 1968. Many students at UCD love following this baseball team in the summertime, due to its affordability (double play Wednesdays: $2 tickets and dollar hot dogs), young players, and competitiveness.

Many students are sports fans, and its common to see A's T-shirts or hats on campus on a nice warm sunny day. In Davis their games are on Comcast Sportsnet California (Channel 34 in the Sacramento region if you are a Comcast subscriber; the channels for other Cable or Satellite providers will vary). The A's are perfect for college students on a budget because they are a much cheaper alternative to the higher ticket prices (and more expensive in general) at a Giants game.

go A's! I remember back in 92 when my dad would listen to them on the radio, The announcers do such a good job cause they actually have to describe the game! They also had the squad then... —Daubert

2011-04-18 18:39:23   Last year I organized a group ticket purchase for a SF - Oakland game. I initially wanted to do 20 people but the sales guy I talked to convinced me to reserve 60 and any unfilled seats i could give up without penalty by the deadline. All told I was able to fill 47 seats for my group. I couldn't have been happier with the A's group tickets office. The hard part was getting from Davis to the game as a group but we were able to do that by pregaming and parking at someone's house in Thousand Oaks and BARTing into the game. It worked great. I'd recommended the A's and BART for anyone looking to get a group of friends together for baseball. —ARWENNHOLD