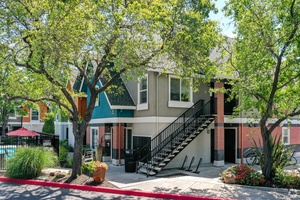 Welcome Home! Oakshade Commons is uniquely located within the desirable south area which is minutes away from UC Davis and downtown Davis. Leasing private and shared rooms with hassle-free individual leases. With fully furnished spacious floorplans between 1 and 5 bedrooms, that includes sleek and contemporary finishes and full washer and dryer. Our community offers you the best convenience of urban living with access to a grocery store, shopping center, restaurants, and much more that are all walking distance to your new home. We are on the W, Q, and M transit bus lines. We look forward to helping your Davis housing search end here at Oakshade Commons!

In 1999, Paul Petrovich proposed building a 3.5 acre shopping center across from Oakshade Town Center, anchored by Ross Dress for Less. The City Council initially approved the proposal but later decided to rezone it after protests from residents and business owners in the area. Petrovich then proposed a 46-unit apartment complex above 5,000 square feet of office space. The Council approved the plan in March 2001 and the site is now occupied by Oakshade Commons Apartments.

Their management changed to FPI Management on March 6th, 2013.

The hot water heater stopped working a few days after I moved in. It took them an entire MONTH to fix it! For a MONTH we were without hot water. There were also a few lights in our apartment that were not working when we moved in. It took them even longer to fix some of them. We've been there 4 months now and some of them still haven't been replaced! We have to walk down and up the stairs in the dark because they can't be bothered to install a light for us.

When we first moved in (which was way after the time slot which we were told), the carpets still needed to be cleaned. We had to sit with our stuff outside the rooms for a few days waiting for the cleaner to finally come to clean the carpets (which weren't even clean afterwards).

There is a pool, but it took them over a month for us to get a key. Now the pool is closed for maintenance so who knows if we'll ever get a chance to use it judging by their speed (or lack thereof) of repairs.

There is a storage closet located by the front doors, but it took them a few months for us to get a key that gave us access to it.

The washer and dryers are old ones that will be terrible for your electricity bills.

The model home looked great, but it's considerably less enjoyable to live in a place where half the things don't work.

Unless you want terrible maintenance service, don't even think of living here. —AABrar

The comment above refers to a hasty turnover of apartments that management had to deal with, so in the beginning, basically all maintenance requests were ignored for months. Moving in last year was a bit bumpy but there's no reason to believe it would be rough again in 2014, since they have a new manager who's dedicated to Oakshade when before they were double-booking a manager from another apartment complex.

What's nice about this place: Location is SUPERB. About 2 miles from campus (need to bike 10-15 minutes or bus to campus probably) and right across the street from a 24 hour Safeway, an Office Max, a Rite Aid, and there's a Starbucks and Wells Fargo inside the Safeway (but those are not 24 hour).

Room is nice, with good closets, nice carpet and a big window. The common space is great. It's nice and all the appliances do their jobs well. Washer and dryer in apartment is very convenient and handle large loads.

What would be different to make this place perfect: Move-in was a bit of a hassle. Something that probably will happen again in 2014 is that you'll move in and there will be no blinds on your window and no ceiling light (or any light at all) in your bedroom. These things are inexpensive, but you have to go somewhere to get them, which is difficult without a car.

Noise: Walls are paper thin. Roommate in room on top of mine complained of getting woken up at night when I was speaking at a conversational volume, so basically if you want privacy you have to whisper, even in your own bedroom. You should probably get a fan to block out noise, too. Also, outside of my window there are TWO AC units that start and stop randomly and could wake a corpse from the dead with their noise. Get a fan to block out noise and you don't even notice them!

Oakshade Commons is pretty great. The only reason I'm moving out is because I'm looking for a one-bedroom place and they don't have those here. Oh well. —MKC