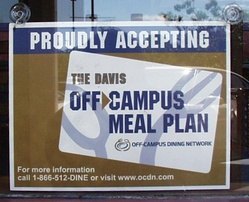 The Off Campus Meal Plan was a prepaid dining plan for students that allowed them to eat at non-campus restaurants as well as on many restaurants on-campus. It was replace in fall of 2007 with the Aggie Cash system. Do not confuse this with the On Campus Meal Plan which is named the Off Campus Meal Plan. Clear? They said it worked similar to the campus Dining Commons, though it's probably quite a bit different. Unlike the DC meal plan, pricing is never a constant in restaurants. The card has a set swipe value of $6.25. If you order $9.50 of food, they will do a "swipe and a half". This means that you won't necessarily get what you pay for due to rounding up of values. (Something that costs $8.50 may count the same as something that costs $10). The OCMP offsets that by having special deals with many of its restaurants, however which ones are still unknown. They have promised to set some exclusive discount deals to members for "values more than $6.25 but only count as one swipe anyway!"

You can also call and make a custom plan over the phone if you only eat at certain types of restaurants, for example vegetarian restaurants.

To get an idea of the high and low ends of the price range for a 'semester' (Sept. 26th to end of Dec.):

It's not any cheaper to buy it in bulk, it's actually is more expensive. There is also a $25 sign up fee.