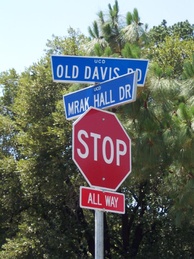 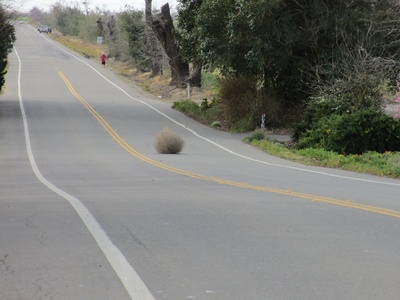 Old Davis Road at the east end begins at A Street and goes through Solano Field, past the Hyatt Place UC Davis. It continues past the Mondavi Center, links with a roundabout to California Avenue, heads south under I-80 and over the train tracks, passes the California Raptor Center (There are a bunch of awesome birds of prey housed here. C'mon. Where else nearby can you see a bald eagle?), crosses the Levee Road, and then finally crosses over the South Fork of Putah Creek. Further south, it ends at a T-intersection with Tremont Road.

In 2012, the Arboretum section of the road was rerouted through Solano Park Gardens and Solano Field, linking the Hyatt Place UC Davis more directly with downtown. The old path along the Arboretum became a foot and bike path, just like the previous stretch between California Ave. and Mrak Dr. did around 2000.

Out here is also the site of the radioactive beagle burying ground. See Center for Health and the Environment and EPA Superfund Sites.

There's also a great waste-water (sewage) treatment plant out there. Go by and see if the APS Digester is online! Maybe someone can give you a tour.

Comments about this road, especially unique places to stop:

2006-03-07 11:49:47   I spent my formative years in Davis. As a young dirty pre-teen in the early 1980's "we" played near the radio active beagle farm. There were many caged beagles there. They all looked the same...like clones! We used to joke about them being radio active. We did not know that there was much truth to the matter. We used to dream about letting them all out. —NeilSaweliew

2007-01-11 10:51:30   Old Davis road doesn't lost its name until it becomes Arboretum at A Street (that might be called something different as one is on campus by then. It and California might meet near the Mondovi center. —BenjaminRosenstein