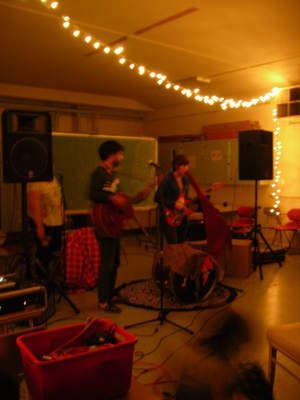 The Old Firehouse (referred to as TB195 on the UC Davis map and often called "The Firehouse") is east of the Music Building and just south of the East Gate. Located there are a couple music and drama department offices, including TA and grad student offices, and restrooms. There is also a larger space for classes and rehearsals. The Old Bandroom for the Band-uh! used to be in there (pictured below is the Old Bandroom door). The door features the Oldschool Aggie Logo.

The Old Firehouse will be demolished at some point in the next couple years (along with the unused steam building to the west of it) to make way for the new musical recital hall.

Plenty of classes have been held in the building, and continue to be hosted as of the Spring 2008. The classroom space is typically used by dance and drama students.

As of 2007 or thereabouts, KDVS has been using the building for some live music shows as a complement to Delta of Venus. Musical acts have included:

As of October 17th, 2008, the University deftly clarified and corrected the misunderstanding that allowed all-ages music to have chance in Davis. KDVS Presents found itself without a venue, resulting in chaos and a lack of shows for the Fall. Major bummer, as rad shows were canceled.

The building has been home to wildlife including Barn swallows.

This link gives you an overview of the area specific to Firehouse: http://www.cevs.ucdavis.edu/map/map_detail.cfm?assetInfo=91

Firehouse is listed as "TB195" on that map, right to the east of the Music Building

If you're taking 80, take the Richards exit, go towards In-n-Out and continue towards downtown. Take a left at 1st St. (right after the train tunnel/underpass), then a left at A St., and a right at Hutchison. Firehouse is straight ahead, just after the gate/barrier thing (which you can't pass but can stop at to unload).