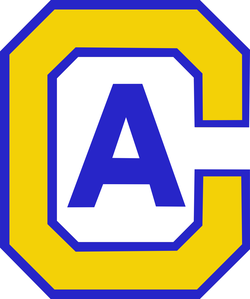 Until recently, this logo was painted on one of the Water Towers.

It is still regularly used by the California Aggie Marching Band-Uh because it's traditional, and the Band-uh likes being traditional. Plus it's a lot easier to form on the football field than the newer Aggie Logo. It also still adorns the door to the old band room in the Firehouse. 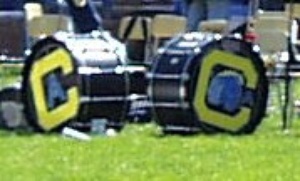 Although having "CA" as a logo seems to make no sense whatsoever for a school whose initials are UCD, if we look back to our rich history it is clear why this is so. In 1908, the University Farm opened on what is now known as the UC Davis Campus. Back then it was under the administrative control of the College of Agriculture at UC Berkeley, kind of like a satellite campus for Cal. The giant CA stands for Cal Aggies - a reminder of the days when UCD was Cal's farm.