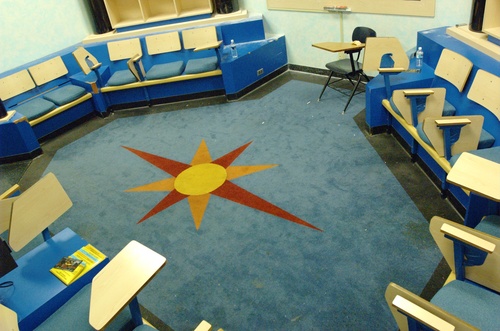 Amidst a sea of ordinary, bland classrooms in Olson Hall lies this strange gem, a magically decorated group-oriented classroom.

Once students cross the threshold into the sanctuary, they find themselves unable to look back; the window looking out into the hallway is a one-way mirror. This feeling of seclusion is heightened by the eternally closed blinds of the outer windows. The furnishings recall a lounge more than a traditional classroom. The cushioned seats match the blue scheme of the cloudy walls and ocean-blue carpet, which features a brightly-colored geometric sun. The vibrantly hued room stands in stark contrast to its neighbors. The large cubbies and coat-racks evoke a warm atmosphere of pre-school nostalgia.

At the same time, there is a Graeco-Roman influence on the room, seen especially in the shiny black columns, running trim and circular seating arrangements. While perfect for a Socratic symposium, it presents a challenge to instructors more accustomed to traditional lecture halls. In order to avoid having his back to the black board and projector, the instructor is forced to roam about the room, or more threateningly, to sit amidst his or her own students in egalitarian discussion.

There is a secret bottle of jalapeno Tabasco sauce, waiting to be discovered by a lucky student and dashed generously over his spiritless microwaved leftovers, the tears of joy running down his beard and into the steaming Tupperware. However, to avoid the curse of Olson 109, said student must replace what is taken with a new treasure for future supplicants. Should the student fail to maintain the balance of the room by replacing the object, he will fail all of the midterms he takes in all of Olson building and wander a lonely course through pathless wastes in bitter lamentation.

Any change of objects are encouraged to be updated on this page.

I had a summer class in there. Don't sit under the AC vents. —twblalock

2011-01-24 10:04:11   I have never been so confused as when I walked into this classroom. I am a junior with at least 10 classes and discussions taken in Olson and never seen this. I walked in on the previous discussion cuz I couldn't see that there was anyone in there (plus it was 9:52). I was like W…T…F… and I Davis wiki'd it. Does anyone have any idea why this room is here? I feel a little demeaned because it is like a daycare room. —MattCorey

This room is truly magical, I just picked up my camera there after leaving it for 24 hours and the room kept it safe! -BA 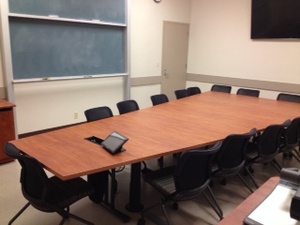