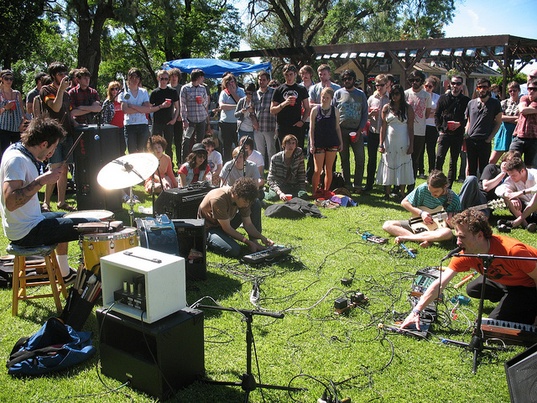 Operation: Restore Maximum Freedom (O:RMF) is a non-profit all ages DIY music festival put on roughly twice a year by KDVS 90.3FM in Davis. This event has a rich history of bringing killer audio projects from the radiowaves of KDVS to the soundwaves of Plainfield Station, the venue chosen for its awesome burgers, cheap beer, and rural location in the middle of Yolo county. The music is still healthy in Sacto/Davis, where KDVS DJs fight the good fight against corporate hegemony of homogeny. Using freeform radio and a grand variety of live shows, we bring the best tunes to the region, as we have for decades.

In today's political climate, while personal freedoms have been undermined by the current regime, one student-run, community-powered radio station has endeavored to make the most of what freedom is left; Freeform KDVS 90.3 FM in Davis has chosen to support the new, creative music of the most sincere artistic scruples, thereby offering a true, outstanding alternative choice to music fans who refuse to settle for less. For people who've grown weary of corporate-controlled rebellion and partying in bars with bro-dawgs and hoochie-mamas — where every flash of the horns and so-called act of revelry is so formulaic and seemingly scripted — Max Freedom offers you a totally different way to party.

Plainfield Station is located at 23944 County Road 98, just across the bridge at the intersection of Road 98 & 29. Technically part of Woodland, it’s closer to Davis. From Davis, take 5th street/Russell blvd west, then turn right on Road 98 and travel north. From I-80, take 113 north, then Road 29 west. Grill and beer bar, so bring cash for chow and cheer. If you don’t have a car, how the hell are you going to get out there? Easy. Tough up and ride your bike on the 5th street route, it's only a few miles - if you're not afraid of the people driving home from the bars at 10PM...

Operation: Restore Maximum Freedom 12 is on May 19th this year and is featuring the weirdest, sickest lineup yet.

Check out the facebook: https://www.facebook.com/events/354341997949107/ and get your tickets early at either Delta of Venus or Records in Sacramento.

Why not have a shuttle bus for this? Just flash your concert ticket/stub and ride beteen the MU and Plainfield Station. (There was a 25-cent bus taking people from the Domes to the Cannery last night, and this is further, later, involves alcohol, and is on high-speed bikelaneless roads.) I guess we'll just have to have a death to get this implemented; volunteers? —SteveDavison

To be fair, he didn't say it was a good idea, just that it's not uncommon. It's not uncommon for people to get drunk at bars and drive home either. Since I'm not trying out for the Darwin award at this time, I think I'll pass on the bike suggestion. —SteveDavison

2006-06-01 01:43:22   question: is it $7 for students for both advance ticket purchases and at the door, or does the student rate only apply if students purchase in advance? —EliseKane

Seems pretty clearly stated that it's $7 for students either way. Therefore students would have no advantage in getting advance tickets, except if there was a possibility of selling out. For non-students, the price nearly doubles (why so steep?!). —SteveDavison

2006-10-04 13:16:52   Maximum Freedom IV is seriously one of the best music festivals on the west coast this year. For the price, great quality of diverse acts, and "real" non-corporate b.s., nothing beats it. —BrendanBoyle