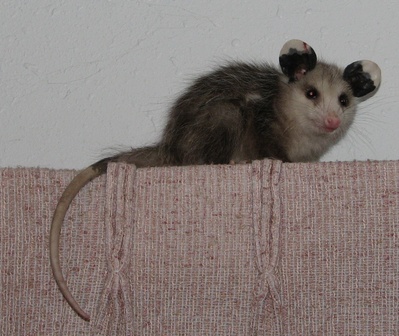 One of the more robust backyard visitors is the opossum (Didelphis virginiana). Often in search of cat food left out, they are often noticed by the volume with which they chew dry cat food. Opossums will establish a territory and a route that they will follow. They are not frightened easily and will stand their ground and hiss loudly if cornered. Opossum literally means "white animal". They are doubly unique in that they are the only North American marsupial and also the only mammal to have a prehensile tail.

Opossums very rarely carry rabies because of their unusually low (for mammals) body temperatures. However, they are known to carry diseases like leptospirosis, tuberculosis, relapsing fever, tularemia, spotted fever, toxoplasmosis, coccidiosis, and trichomoniasis. They are generally not particularly dangerous compared to most wild animals. Having an opossum about is actually a very effective way to eliminate the snails from one's garden.

Opossums can be domesticated and potty trained. It is recommended that you do not try this with an adult opossum, but if one finds an injured baby opossum, nursing it back to health and either keeping it as a pet or shleffing it off to someone else as a pet (your benevolent attention may have rendered it unqualified for the rough life of the Davis urban wilds) might be a larf. Once you run out of snails to feed them, they also like hardboiled eggs. Kris Fricke once had a pet opossum.

Note: possum is a regional shortening of opossum.

I don't think this is true. Where is the proof for this? I think people are just confused on how to spell it in N. America. —NiareeHopelian

For one reference, check out the American Heritage Dictionary of the English Language entry for possum. They label it as being "Chiefly Southern U.S." Though these regional shortenings often come about, at least in part, because of a disregard/ignorance of the pronunciation reflected in the proper spelling. —JevanGray

UC Davis is an active place for those who care about opossums. The Opossum Society of the United States, in Irvine, CA, boasts members from the UC Davis Vet school and sometimes hosts events and workshops at UC Davis. For more information on all things opossum, their website is a helpful resource. 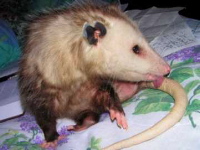 I met an opossum.

Look how soft he looks.

2005-01-23 23:45:51   Maybe the possums around here are smaller or something, but I have scars that dispute the "are not particularly dangerous". Ever see what their mouth looks like open?—JabberWokky

2005-06-09 13:47:24   Ugg! How about some respect for the opposums! Our only marsupial! Expect a new properly named page with pictures of non-dead opossums and useful information and links soon... —MarieBoisvert

2005-06-10 03:46:16   There are two cohorts of marsupials: Australidelphia and Ameridelphia. The common name for opossums in America is "opossum" and in Australia is "possum." This is to distinguish between the two cohorts and the distinct species they contain. They are both pronounced the same, so it all boils down to spelling. If you want to get technical, this page and all the references within should be renamed "opossum."—NiareeHopelian

2005-06-13 10:59:01   Interestingly enough, when I check in my dictionaries, the entries for opossum include a different pronunciation than possum. —JevanGray

2005-08-15 19:52:53   The clicking 'possum came back last night. JeffreyNonken was awakened by the clicking at some godawful hour, woke up our older daughter and they ran outside to play with the little guy. A fine time was had by all except our 9 year old who was having a nightmare about pizza. —BlancheNonken

2005-12-29 12:37:35   Opossums very rarely carry rabies because of their unusually low (for mammals) body temperatures. However, they are known to carry diseases like leptospirosis, tuberculosis, relapsing fever, tularemia, spotted fever, toxoplasmosis, coccidiosis, trichomoniasis, and Chagas disease. They are also carriers of fleas and lice. Possum Pete hangs out in our back yard. I like to watch it, but I would never think of touching it! —AnaluciaCordova

2009-11-18 10:40:10   I love oppossums and thought I was the only one! I assisted an injured baby one back to health—it would sneak into our cat door around 10pm and make a b-line for under our bed. I noticed a gash on it's head and started to put yogurt and catfood under there w/ a heating pad and bedding. It never peed or pooed or whatever and it always respectfully left by the time we woke up. It just needed a place to chill for a few weeks rather than be roaming about all night. The gig was up when it tried macking a bowl of ice cream on my bedside table....then i moved the bedding and everything to the covered back porch and it visited regularly. Happily ever after. —kettle