Some refer to this as the best non-alcoholic bottled drink in existence. It's carbonated, contains real orange pulp, and it usually comes in a strangely shaped little bottle. Part of the fun is that you don't get nearly enough. It's also fun to pronounce the name.

Though the word "Orange" is in the name, the juice itself is actually yellow. 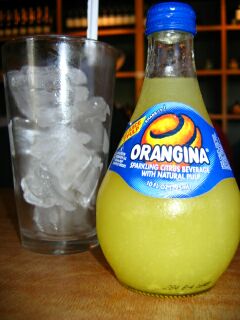 Places to find it

Things that taste great along side it

A few years ago I read somewhere that Coca Cola tried to buy Orangina but the French government would not allow it. -EdPereira

Well, there is its competitor (unless they're owned by the same company) aranciata. I always pronounce it Orang-eeee-na ... but sometimes I think it's fun to call it Orang-eye-na ... like the vagina of an orange. — S

2006-07-07 01:55:48   I found this stuff at some little Mexican food place between here and Santa Cruz. Soooo goooood. And I don't even like orange juice. Also Safeway here sells this wonderous juice. —MichelleAccurso