Oxford Circle, is a smallish street with many people living on it. It is part of the "college streets" in the town street name themes. Oxford Circle was also the name of a Gary Lee Yoder band that shared the stage with such famous names as The Grateful Dead. The band never got a large record contract, but released a single "Foolish Woman/Mind Destruction" that is apparently now a highly sought-after collector's item. 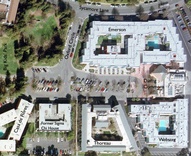 Oxford Circle from Above