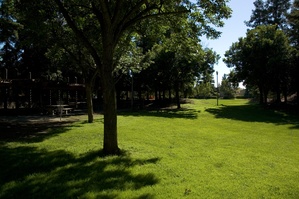 The park offers nice picnic areas and lots of grass.

Oxford Circle Park is also known as Little Big People's Park. It's awesome. It's got a playground that's like a regular playground except, well, big. There's a giant geometric-like pyramid with ropes to climb on and a weird thing that looks sort of like it's supposed to be a basketball hoop and a hammock and a secret hideout in the air that spins(reminiscent of those torture cages but nevertheless very fun). There used to be this slide where people pee and a fireman pole and a bunch of other crap (see below). Of course, there's also a lot of grass. 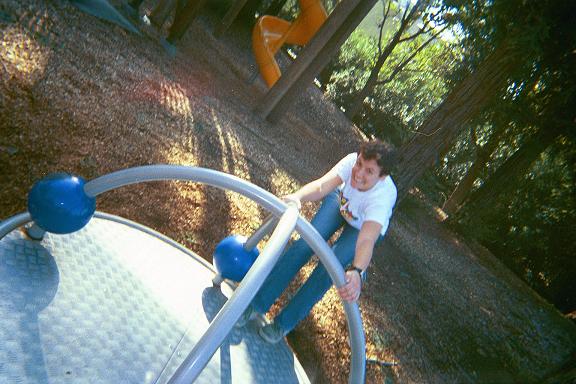 One of the greatest things to 'play' on at the playground is the merry-go-round—you know the type, the kind they have to remove because too many kids end up flying off of them. Nevertheless, the Big Peoples' merry-go-round is not for the faint of heart, nor for the sober. It is a highly popular location for the inebriated or people under the influence of a certain herbal treat. The merry-go-round is also sometimes referred to as the Mega Mobile. But either way, the Big People's Park can be enjoyed by those both big and small, so check it out sometime!

Most of the current equipment (one may notice a striking difference between the wooden tower and swings and the new stuff) was put in over the summer of 2002, replacing a weird disintigrating tire-hammock-thing. KrisFricke would like to mention he was one of three people actively involved in choosing the current equipment, while on the City Renovations sub-Committee for the park in the spring of 2002.

During Spring Quarter, the grass is filled with sunbathing students. KenBloom wishes the park were not filled with nearly naked sunbathers. Others don't mind as much. Sometimes random drunk college girls will walk through this park and try to make out with you. This is best to be avoided, no matter how appealing it may seem at the time. 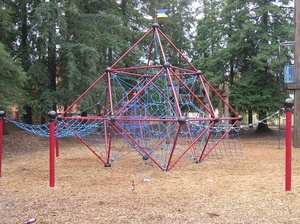 For size reference, compare with the conveniently placed beer bottles. 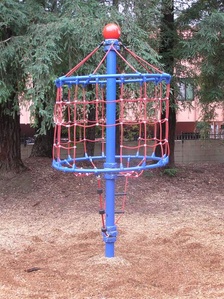 This thing spins around! 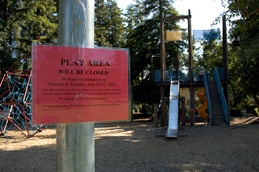 The sign found in the park a week before the demolision.

The wooden playstructure in the park was removed on June 20, 2005. The reasoning behind this move was that the the structure "does not meet current safety standards and cannot be modified to meet them." The structure was mostly wooden, and was extremely high off the ground. There were two slides: a yellow, plastic spiral slide, and a metal, straight slide. The structure was also home to a fireman-style slide pole, which was quite fun to slide down because it was so high up. 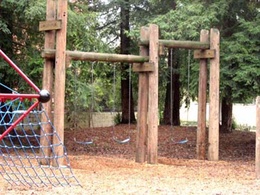 The only wooden structure left is the swings.

The side of the structure the day before it was removed.

Another view of the structure the day before removal.

From underneath you can get a real feel for the size of the thing. 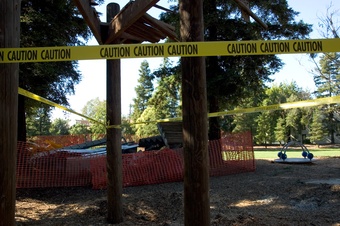 The structure the first day into its mauling.

Pieces of the structure lie in a pile.

2006-10-09 12:57:42   Man... one of my favorite off-the-beaten-track quirky fun things about Davis is now ruined. Screw you, City of Davis. What's next? Are the giant dominoes going because people might trip and hit their heads on them? I LOVED the slides. Pure unadulterated kid-style goofiness, all taken away because some bureaucrat got nervous. By they way, I'm fully aware that I'm unreasonably upset about this, but it really did make me feel like a kid who got his candy stolen by a stranger. Oh well. —BigDave

2009-03-24 15:44:20   I miss the old tall wooden structure. It was scary high, and fun! It seems like someone's always closing the cool high places. Like the top outdoor floor at the Death Star on campus. That was the coolest view in Davis. Then they blocked it off with some door. It just tempts me to climb around it, which is really dangerous! —RonB

Stuff like this usually gets removed because someone was stupid enough to injure themselves on the equipment and actually try to sue the city for their idiocy. —IdealParadigm