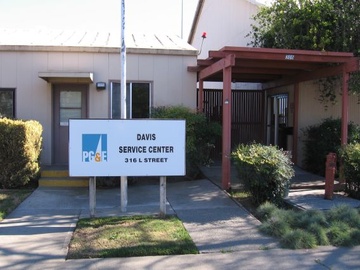 The PG&E Service Center (Corporation Yard) on L Street is not the place to pay your bill. 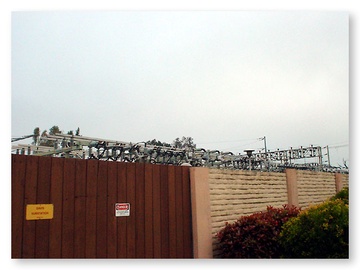 The substation pictured above (across the street from the Corporation Yard) backs up to the L and 2nd Garden on the east and is held by the train tracks to the south.

This is the local office for Pacific Gas & Electric, the fine people who bring you your energy through pipes and wires. In April 2005, the Yolo County Board of Supervisors voted unanimously to begin the annexation process to have SMUD (Sacramento Municipal Utility District) provide electricity to Davis, Woodland, West Sacramento and unincorporated areas of the county instead of PG&E. The SMUD board of directors voted May 19, 2005 on whether to annex this area into its electricity service. SMUD rate-payers -but not Yolo County rate-payers- voted down an annexation proposal in 2006 that would have extended SMUD's territory to include Davis, Woodland, West Sacramento and the area between the cities. The local PG&E office was previously at 707 4th Street Suite 200, where the McCormick Building now stands, but the building was pwned by a tree so they moved to the current location.

—I used to pay my bill at the office right up until they closed. I never did see a tree fall on the office. They posted notices about their move to Cousteau Place well in advance of their planned closure date. Perhaps the tree fell on the building just after they moved out. MaxLucas

PG&E declared bankruptcy on April 6, 2001 due to their flawed business practices. Governor Gray Davis arranged a multi-billion dollar bailout of PG&E. The multi-billion dollar bailout is one of many factors that led to Governor Gray Davis' eventual recall. Today, PG&E customers still bear the burden of this bailout in the form of above average electricity rates. This has continued for years and will most likely continue for some time.

4.8 million PG&E customers will pay between $7 billion and $8 billion of PG&E's bankruptcy-related costs. That is an average of $1,458 to $1,667 per customer over nine years. This payment appears as a non-bypassable surcharge on monthly electric bills averaging $162 to $185/year ($14 to $15/month). This has led to higher monthly electric bills for millions of people.

Many people still feel animosity towards PG&E's corrupt management that is responsible for its terrible business decisions and multi-billion dollar debt. Customers will still be paying PG&E's debts far into the future.

Gas meters measure volume and are calibrated in 100's of cubic feet (Ccf), but PG&E bills you in energy, measured in therms. Convert volume to energy by multiplying by the conversion factor (1.028123 therm/Ccf PG&E natural gas).

Rough energy calculations: It'll cost you approx. 1 cent to burn up a cubic foot of gas, but you get 1 megajoule of energy when you do so. 1 MJ (megajoule) is 1 million watts for one second. This is a good deal, considering it'll cost you 3.5 cents to get that same megajoule in electricity. PG&E uses the US therm (different than the European Union's value, of course) for gas energy, it's equal to 105.4804 megajoules (approx. 29.3kWh). For reference, a gallon of gasoline yields 135 MJ; at $3.00/gallon that's 45 MJ/$.

You used to be able to pay your PG&E bill at Ace Hardware (the southern "housewares" building) until 6 pm daily. As of 2006, this is no longer the case. Kim's Asian Food is no longer listed as a payment center as of 2011.

An Authorized Neighborhood Payment Center is a store or other place of business where you can pay your PG&E bill. Credit deposits, late notices and reconnection payments may also be made at these authorized locations.

When using Authorized Neighborhood Payment Centers you must either present your bill or have your 11 digit PG&E account number available. Things to remember when using this option:

2005-05-17 17:45:16   Davis residents would stand to benifit with a transition from PG&E to SMUD. SMUD is publically owned and managed with an elected board and they have more investment in renewable energy sources. —MikeSiminitus

2006-07-23 19:43:56   Is there a way to find out information about power outages in Davis? (besides having the unfortunate experience of having a power outage) —DannyYeung

2008-03-13 14:44:42   I would like to know if anyone else is getting suspicious charges on their PG&E bills—our gas usage bill mysteriously more than quadrupled even though we didn't change our usage at all. I know gas prices increase this year and baseline gas prices increase during the winter, but it probably shouldn't jump up $80 when usage (without running the heater, btw) remained the same...

Please start a dialog if you've had the same problem...there could be something fishy here, since it wouldn't be the first time PG&E hasn't been completely honest... —Julianna

2008-11-05 19:41:32   The perfect example of why a monopoly is horrible for customers. Horrible F*$(#$#king customer service, terrible accounting practices. Strongarm tactics to force customers to settle or face shutoff. Impossible to reach real people at times who can actually answer anything. After the gas shut off in South Davis they forget to actually turn my back on. Today I call and they tell me sure they will come "Sometime" today. I leave work at 12:30 per PG&E's advice and now at 7:39 I finally get a call saying they will be here to turn the gas on after they shut if off. I have more to tell but its impossible to condense into a short story, but basically when SMUD comes back on the ballot I encourage all to vote for the opportunity to have competition in our electric and gas provider as PG&E has F%$#(ked me so bad over the years. Waste hours of my day because they can't narrow down an appointment only for them to show up 20 minutes to 8pm. They can't narrow down appointments to better than an 8 hour window??? give me a break.. Who else could stay in business with this type of service model??? —loneshark

2009-01-08 21:30:19   Re:Julianna, I too had a HUGE bill last month and another this month. For the month of October, my bill was $275 when it should have been around $50(I live in a small apartment with no washer/dryer)and had barely used any appliances that month. l called PG and E and the girl on the phone asked me if I had "had any parties or guests", as if that would account for the $275 bill. After an hour and a half of not getting anywhere with her, I decided to go in and talk to an actual person who might be able to help me. The man at the PG and E office I dealt with was pleasant enough, but the woman who also "helped" me was not. She again tried to make it seem like my bill was normal, but told me they'd look into it. I later received a bill for $90. I paid that (even though it was still too high) only to find that my next bill was for close to $400!! I went in again, and as I explained that my bill could in no way shape or form be correct, she actually rolled her eyes at me. I am still dealing with this mess. Something's going on here for sure. —dgirl

2009-08-12 16:20:08   PG&E has horrible business practices, they overcharge, and they will lie to their customers in order to get a little bit of money. If SMUD comes back on the ballot, I am voting for them. There needs to be some competition in Davis, same goes for Comcast. —IdealParadigm

2011-04-01 06:54:16   Alright.. I suppose I will play devil's advocate on this one. I have had pretty decent experiences with PGE over the past couple of years. I received several bills that did seem a bit high and, after investigation, found there to be a leak in the gas main leading to my apartment. They fixed the leak, reduced the bills and I also had them shut off the gas to my apartment altogether since A) I am almost always in my room when in my apartment and B) when the heater is on it does not heat the bedrooms unless you leave the doors open, which I never do... So, I never use the heater anyway.

Last year, I was laid off from work and discussed the issue with PGE. PGE helped me set up a plan to maintain my utilities, making delayed payments with no overcharges or extra fees and treated me with respect even though I felt like a "less than" for months after being laid off.

Every time I have to speak to anyone at PGE I have always been greeted with friendly and professional attitudes and intelligent responses. Perhaps things have changed over the past year or two, I don't know. What I do know is that it seems my experience with them is rare if the above comments are to be taken at face value. —Wes-P

2012-11-22 10:37:22   LEARN ABOUT SMART METERS ON YOUR HOME: If you are interested, please read about the SMART METERS that PG & E may have installed on your home. The electromagnetic radation pulses on your home have been shown in studies to be correlated with many health problems (especially for young children and the elderly): http://emfsafetynetwork.org/?page_id=872 I decided to "opt out" of the SMART METER using thier online form : http://www.pge.com/myhome/customerservice/smartmeter/optout/ —TeriOuimet1