The Panda Express (PE) Franchise is well-advertised for their Orange Chicken and their thriftyness, We tested these assertions by comparing them with Davis Noodle City (DNC), a local restaurant that has Orange Chicken on the menu, but does not consider it one of their specialty dishes. Thus, if DNC comes out on top, that means one of their non-specialty dishes is better than PEs "best" dish. Note, this experiment does not test whether DNC's best dish can beat PE's best dish. This experiment was performed on Sunday, November 6th, 2007 at 5 PM, by CraigBrozinsky and 3 others. It appears to be the first formal example of a Business Showdown on the wiki. Hopefully others are soon to follow.

Average travel time between PE and midpoint of Anderson & 8th was 5 minutes, and the average travel time between DNC and midpoint of Anderson & 8th= 5 minutes. The DNC team called in their order as they left the parking lot of PE, and were given a receipt at time=9. When the team entered, the owner told them "Wow, you're quick! But so are we," and pointed to a bag on the counter. The PE team received a receipt at time=14, five minutes longer than the DNC team. Based on these findings, if the teams started at the mid-point, both teams might have gotten their food at the same time, but it is unknown when DNC completed the order. Bottom line: Panda Express is no quicker than a local place, and the opposite may in fact be true. 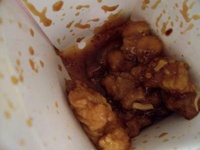 UPDATE: This info is out of date as of March 2011. Orange chicken at DNC is now about $9.00 for dinner and therefore considerably more expensive than Panda Express. 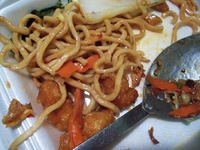 Even blindfolded, the participants were able to tell which food came from which restaurant. The tasters agreed that PE's Orange Chicken was much sweeter, and that DNC was much spicier, tasted more like real chicken, and actually had an orange flavor. 1 person preferred PE, 3 people preferred DNC. The Chow Mein from PE had more flavor than that of DNC. However, putting the Orange Chicken sauce over the DNC Chow Mein led 3/4 tasters to prefer it by far. Bottom line: Most preferred DNC, but individual preferences exist.

We all agreed DNC's food looked better, and their inclusion of Bok Choy gave them freshness points. PE's noodles looked and tasted like they had been out for a few hours, and DNC's seemed very fresh.

Panda Express does not live up to its reputation of being cheap and quick. A local restaurant, Davis Noodle City was arguably quicker, definitely cheaper, had a better presentation, and 3/4 people found it the tastier Chinese Restaurant.

repeat and see if this the results are duplicated!

Personally I figured DNC would kick some ass in this. —StevenDaubert

I don't go to PE, personally I resent them for the food, the hibachi-san name (even thought it's irrational resentment) and the fact that they replaced the decent but pricey pizza joint, which replaced beloved boston chicken/market. —StevenDaubert

2009-03-29 20:14:23   I've never seen a Panda Express with a drive through, their food doesn't use MSG like Taco Bell, and they have panda shaped hedges out front. Say what you want about which one tastes better, but Panda Express is definitely no Taco Bell.

Davis Noodle City has strange jiggly fat on all of their chicken dishes, while El Mariachi has nothing but delicious lean cuts of meat. The two restaurants can only compare in the number of snobbish comments about "authenticity" on their wiki articles.

Also, Panda Express has a few thinks I can't get anywhere else in Davis. Their fortune cookies with a touch of vanilla, the only truly spicy chicken dish in Davis, and beijing beef. —OrofinJackson

That could be trouble, what if we did a Drom's vs Bizarro world? we could start a Wiki riot. :)

A quick search of taco bell's website and you're surprised you turned up nothing? Try google next time!

More reasons why Panda Express and Taco Bell are incomparable:

-You can see everything the chefs are doing at Panda Express. At Taco Bell, which usually seems to be employed by social degenerates (no offense if you're employed there) you have no idea what they're doing in those back rooms. My best friend worked at Taco Bell for a year and he refuses to eat fast food now. He's seen things. But he'll eat at Panda still because you can see everything.

-Taco Bell consistently gets failing grades for cleanliness in their restaurants. It's consistently in the top 10 worst fast food lists by NBC. Enjoy the cockroach legs and rat feces.

-Billy Mays signed a contract to advertise for Taco Bell just before his death. Coincidence?

At this point I'm just procrastinating from finals studying and I think you probably get that I like Panda Express a lot more than Taco Bell. —OrofinJackson

2011-03-10 21:25:13   Being that DNC's chicken is not breaded and quite expensive for Chinese food, Silver Dragon would have probably made for a better comparison against DNC. As it stands, it's like comparing apples and oranges. —ScottMeehleib