Patrick Sheehan is a second-year Mathematics and Political Science double major. He is a current Business and Finance Commissioner and intern to the ASUCD Controller. He previously served on the External Affairs Commission, as a Senate intern, and as President of the Tercero Leadership Council. Patrick is endorsed by The California Aggie. 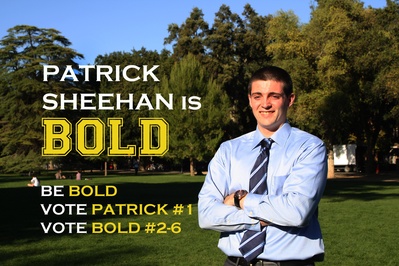 I am running for Senate with BOLD because I would like to improve upon the services that ASUCD provides to students and make the Association more accessible to the average student. While I have my own ideas for improvement and change, I believe that the most important service a Senator should provide fellow students is an open mind and ears. If elected, I promise to hold a majority of my office hours in public locations such as the MU and Silo in an effort to engage a greater portion of the student population.

Qualifications: - Tercero Leadership Council President (’10-’11) - Intern for Senator Andre Lee (’10- ‘11) - External Affairs Commissioner (Spring ‘11) - Business and Finance Commissioner (Current) - Intern for ASUCD Controller Don Ho (Spring ’11 to present) Experience: I have been involved in ASUCD for over a year and authored five pieces of legislation dealing with a variety of both internal issues and external projects. In addition, I have served on the External Affairs Commission and am currently a member of the Business and Finance Commission. From my experience in these two commissions, I have gained a better understanding of the bylaws and ASUCD’s legislative process. Finally, as an intern to the current ASUCD Controller, I have become familiar with the budget, which will allow me to effectively allocate the $41 YOU pay every quarter for the services ASUCD provides.

Platforms: PROACTIVELY REDUCE BIKE THEFT Bicycle theft in Davis has always been an issue. I would like to work with ASUCD’s Student-Police Relations Committee and TAPS to implement a proactive solution to bike theft. The tactic uses “bait bikes” to lure and catch bike thieves in the act with hidden GPS locators. This program has already been adopted at the University of Wisconsin – Madison and other UC’s. A description of the model can be found here: http://www.uwpd.wisc.edu/crime-prevention-bait-bike-program.htm

ADVOCATE FOR ACADEMIC REFORM ASUCD is often perceived as being disconnected from other governing bodies on campus such as the Academic Senate. I would like to both improve the Association’s connection to these bodies, and advocate for change in academic policies. One specific issue I would like to shed light on is the current requirement for students to take GE courses for letter grades. In order to encourage students from all majors to branch out and pursue their interests in different departments, I believe that undergraduates should be able to take courses “pass or no pass” and still receive GE credit for those units. A model for instituting this change would come from UC Santa Barbara, which has already adopted this system successfully.

2011-10-27 12:37:58   As someone who has worked with Patrick, I can definitely say that he is committed to the students of the university and will GET STUFF DONE. He is a great candidate and sure has my vote. He has the right motivation as well as the experience to be a great ASUCD Senator. —mssumerel