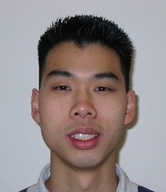 Paul, as he looked in 2003. He looks pretty much the same today.

Paul Amnuaypayoat finished his coursework at UC Davis in December of 2004 and was a campaign advisor of the Friends Urging Campus Kindness slate for the Winter 2005 ASUCD Election at UC Davis. He ran for ASUCD Senate as an independent candidate in Winter of 2003, the last election before Choice Voting was adopted, but did not win.

Paul was a supporter of implementing the Countback system of filling vacancies in the ASUCD Senate. Additionally, he attempted to solve the issue of ASUCD Open Government in Spring 2003 by writing legislation to put important documents onto the ASUCD web site, but unfortunately recent discoveries have warranted additional efforts by concerned citizens today.

He was employed full time at a credit card terminal deployment company in Sacramento from 2005 through August of 2007 and was involved with the Davis College Libertarians, Model UN, and AGASA, though he has not admitted to any official connection to the Campus Crusade for Chaos and Confusion. His residence in Davis spanned from late 1998 through August of 2007. Since then he has moved to New York City where he completed his MBA degree, and continues to edit various wikis from time to time.

He was known as LibPaul by the Orwellian faction, but this was mainly to differentiate him from MathPaul.

2005-05-15 09:36:22   Paul, I was shown the minutes of a past ASUCD senate meeting (I think from last month) where you said that you thought I would be ASUCD Senate material. I'm flattered by that statement from you. Things didn't really pan out that way while I was in Davis i guess. My heart was more into DCR than ASUCD. I think it would just be bizzare if I ever ran. I mentally see myself more behind the scenes. —GeorgejAndrews

2006-01-23 09:04:49   The last time I checked, I was the only official one before graduating. I do know of some others I can refer you to if you are looking for more info related to that party. —PaulAmnuaypayoat

2006-04-06 02:16:03   Oh, that was you...yes, I recall now. I hope that whatever stress the circumstances caused has long since been alleviated. Take care and if you see me around, don't hesitate to say hello. —EliseKane

2006-05-06 21:35:12   If you were referring to Chad and Marie, haha, I definitely have met them...but at the beginning of the school year. I actually saw you once, actually, at Chad's recent court case, I was sitting with Jon Leathers. —AlyssaOlenberg

2007-06-10 15:40:23   hey paul, The People's Vanguard of Davis is different from the The Worker's Vanguard which is a communist paper. the former being a local davis blog. hope all is well. zaijian. —JessicaRockwell

2007-11-21 09:12:57   If it makes any difference, I saw your edits and even skimmed over them as being correct. The dead links are a joke. Sort of like a link going nowhere is self-referential humor. I believe that most if not all of the gag "links" are in user entries and comments. Another example would be me referencing selling tickets to the Memorial Union Rooftop Pool, a la the location that does not exist (a classic academic prank appearing in common lore and on film). If there was an evolution discussion, you might refer to the missing link. It's a minor, silly, dumb joke, but it is pretty much confined to comments and user entries. It's also obscure enough that not getting it isn't exactly uncommon, and you're hardly the first one to try and "correct" it. There's a long history of it, as a matter of fact. —JabberWokky

2007-11-24 07:47:10   Thanks for trying to reach out to Eric. I know diddly squat about ASUCD politics, so I can only talk in the larger issues... which is why I've been trying to urge him to create a talk page so the specifics can be hashed out. —JabberWokky

2007-12-01 08:41:33   Davis Wiki and Chico Wiki are separate projects with separate norms and standards. It doesn't hurt to have our own version of the page, especially if we link to their version. We wouldn't want to redirect Valero to Wikipedia, would we? It's really irrelevant that they copied our version of the page and haven't made it their own yet. They will be different eventually. Our version of the page will stick to what's relevant to Davisites (that they're a school to the north of us and they're infamous for partying) and theirs will hopefully look kinda like our UC Davis page. —WilliamLewis

2007-12-01 10:55:51   As an example, the Sacramento News & Review entry for SacWiki would focus on local coverage, while the Davis entry would list local pick up places (not of interest to readers of the SacWiki) and links to articles of Davis interest. The same subject (even when it is in a given location) can have different perspectives by different locations. Different wikis also have different editorial policies... some don't allow reviews or commentary at all, and the admins are quick to ban anybody who adds an opinion to an entry. Each is a distinct community... kind of like the communities they represent.

2007-12-07 08:36:29   Its not like Brent made all this stuff up like Friedman is doing with his allegations. I got plenty of calls and messages about the allegations from different people regarding them. Brent posted what people were talking about. Most of those allegations were substantiated by at least one other post, or even substantiated by GO itself as they tried to explain what really happened.

I was there in Fall 2004 and managed or advised campaigns up until last winter. This Fall GO ran the shadiest, dirtiest election in my 3 years at UCD. Even some of the older ASUCD folks agree that Student Focus was never this shady. There's a reason that many of the usually neutral folks in ASUCD, like Brent, are against GO.

On a side note, one reason I believe that this election is a little more intense on the wiki, is because the Aggie has decided not to cover ASUCD beyond the Senate briefs every Monday. They do not investigate any of the allegations, although oddly enough they do seem to acknowledge them in a vague Op-Ed they wrote after the election. They won't even print letters to the editor from any side about any ASUCD political issue. —JamesSchwab

2007-12-07 16:46:04   You know Brent, just as the South Park-esque pic on his page says, he likes to "shake things up". He's not Jabberwokky he's Brent. Expecting a certain behavior from someone is not that person's fault, you just had wrong expectations. For all his controversy Brent has remained Brent - take that as you will for good or bad. Brent is very active on campus and expecting someone as passionate as he is to remain neutral, is a bad expectation.

I was not expecting Brent's posts to be without criticism. But to say that since Brent is posting all the complaints, that all these complaints originated from Brent and Brent only. My point was that his allegations were allegations talked about by a lot of different people, who are not active wiki editors. Brent and Friedman have their battles, but you have to distinguish between there personal attacks and the real incidents that happened and have been confirmed from multiple sources.

That said, it is good to have an editor like yourself that does care about and knows the history of ASUCD, but can play a neutral role. And trust me if you were still a student and active in ASUCD, you would be posting here....it's 2004 all over again. —JamesSchwab

2007-12-07 17:03:53   Paul in response to your thoughts on LEAD's philosophy I have to take some contention since I was very active in its development over the past 3 years. LEAD has people from many communities: varying economic bakcgrounds, and varying political beliefs. We have Socialists, Dems, Republicans, and decline-to-states. Diversity is a mix of culture, religion, economic class, sexuality and political beliefs and LEAD runs the gamut of them all. The UCD campus is split into these communities, be it ethnic, religious, political, by major, sexuality, or even sports. LEAD has worked to bring these different communities together to better understand each other and to work on common goals as well as support invidiual community goals. It's never perfect, but I think we've done a pretty good job. Things have changed since your graduation. —JamesSchwab

2008-05-28 04:23:10   All posts by AnonAggie came from the IP address 128.32.58.99 which is registered to the UC Berkeley campus. A reverse DNS lookup on that IP address gives us a hostname of "barils-mac.Journalism.Berkeley.EDU.", which is a machine in one of Berkeley's restricted access computer labs used by the graduate program in journalism. According to Aggie staffers, Talia had few allies in her dispute at the Aggie, which alone implicates a short list of people including herself and Peter. It is public knowledge that Talia was attending Berkeley's graduate journalism program at the time. Aggie staffers state that she was the only Aggie alumni attending Berkeley's journalism graduate school when the posts in question were made.

There is no need to clutter up the article with where this assertion came from. This is what we call beyond a reasonable doubt.