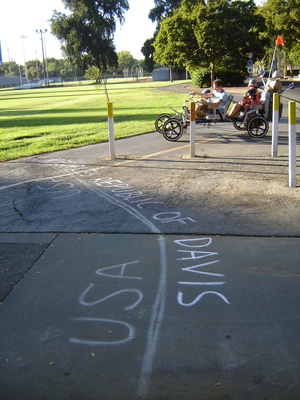 A young family defecting from the P.R.D. to escape oppressive park taxes. People's Republic of Davis

Davis is known worldwide for being somewhat weird. In fact, the town has been featured in "News of the Weird" for the infamous pothole uproar, the infamous toad tunnel and the snoring incident. And then there is the fact that we are a supposedly nuclear free city, a self-declared pro-choice city (via a City Council resolution in 1989), and with one of the strictest smoking ordinances in the country. Rebellions to the weird establishment of Davis come in the form of a Conservative Coming Out Day, which ironically adds to the weirdness of Davis.

There is a similar, bit different term that started in East Davis: the "People's Republic of East Davis" (PRED). PRED constituents had official meetings (parties) at various East Davis locations and even occasionally met at "PRED Embassies" (houses west of the tracks). There was even a flag and an official language, "Prethek," invented by one PRED member and linguist, Abram Jones. Prethek had no actual speakers, but that is beside the point. PRED has also had a camp at Burning Man every year starting somewhere about 1996.

Yes. This is not a rumor. And now there is a PRED dragon. Raaaaar! omrob

Another possible source for the phrase:

"Another of the city's critics was a railroad executive who couldn't hide his annoyance when officials asked his company in the early 1990s to contribute up to $1,000 for a planning project the city was undertaking next to the railroad tracks. 'This letter is tantamount to railroad robbery. However, since we are forced to live with the People's Republic of Davis, we will accede to your demands in the interest of the commune welfare,' the executive wrote in response, enclosing a check for $500." —source

The phrase appears on the sign outside of Mishka's Cafe, which notes that the cafe is the "Only coffee roaster in the People's Republic of Davis."

In addition, since Davis is rarely at a loss for charm, another nick-name for the city is the Little Tomato.

Davis Dollars are the official currency of the PRD, though they're tied to the US Dollar to prevent rapid inflation in our tomato republic.

The term was in use in the 1970's, predating all of the above. DonShor