The Physics Cats are some of the department's friendliest and fuzziest physicists. Historically there have been multiple cats that have called the  Physics Building home but currently there is only one orange cat named Cheeto. The origin of the cats is unknown and shrouded in myth. At times they have garnered themselves great renown both in local media and as viral internet sensations. The cats are usually willing to entertain guests but please do not feed them. They are fed and cared for by members of the Physics Department.

Cheeto is an orange tabby that lives around the east side Physics Building ramp. He is usually friendly but sometimes wants to be left alone to sit in the bushes. You can follow him on Instagram. 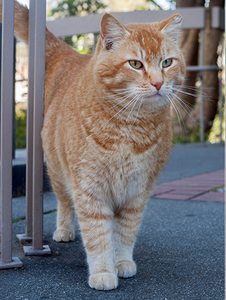 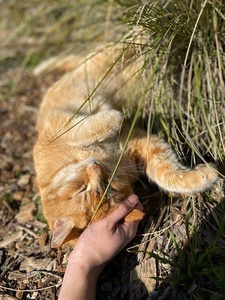 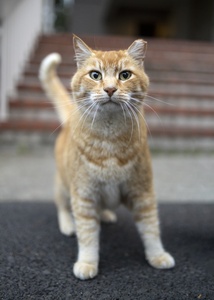 In 2019 Cheeto gained a media presence after putting on a little weight. Infographics were posted asking people not to feed Cheeto as he was gaining too much weight and the squirrels were getting heart disease from eating the extra food. This was picked up by several media outlets including the Sacramento Bee, LoveMeow, and several viral tweets. Controversy arose as to whether or not this was a valid concern, claiming that this was simply an attempt to fat shame Cheeto. He has since lost weight. 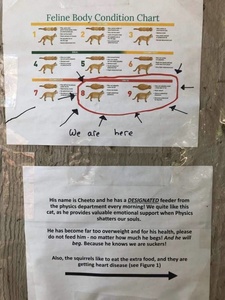 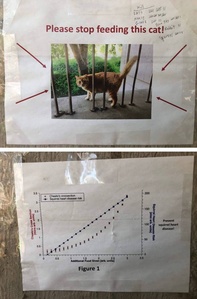 Grey, Grey Physics Cat, or Erwin was a a valued member of the physics community that used to be friends with Cheeto. In 2017 he developed feline leukemia and was taken home by a member of the physics community to be cared for and treated by the UC Davis Veterinary Clinic. He has not been seen since but reportedly died in March 2020. Some members of the community believe that Grey did not actually die, but rather was stolen to be a house cat. 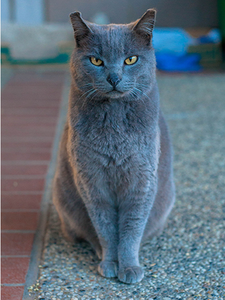 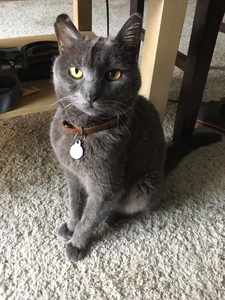 Grey in a collar in his old age