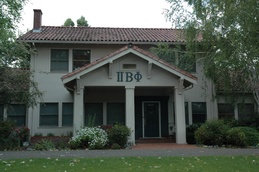 Pi Beta Phi is a sorority located at 445 Russell Blvd, directly across the street from UC Davis' campus! The California Theta Chapter of Pi Beta Phi is a group of friendly, fun, well-rounded women who enjoy all types of activities. Whether studying in the library, relaxing on the quad or downtown, or participating in our wide-range of community activities, you will be sure to see Pi Phi's hanging out together! We pride ourselves on our great reputation, excellent GPA, and ability to balance work and play.

The first chapter was founded at Monmouth College in Monmouth, Illinois on April 28th, 1867. Pi Beta Phi was the first national secret college society of women to be modeled after the Greek-lettered fraternities of men. The Davis chapter was chartered in 1980 and is known as the Theta chapter.