Pi Day is celebrated on 3.14 (March 14th), often at 1:59pm. A rather obscure and geeky holiday, it is popular among scientists and at universities. Various celebrations have been held in Davis on different years.

In 2007 the Mathematics department held a pie social in celebration.

These were found on the bulletin board next to the Experimental College on March 14, 2005 — the same number as the first three digits of pi. The posters claim to be affiliated with the Campus Crusade for Chaos and Confusion but have a slightly different flavor to them. For one thing, they are less confusing. 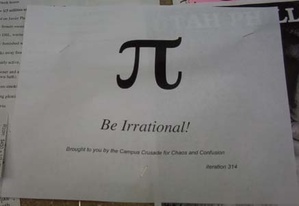 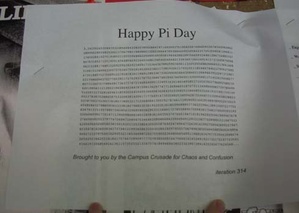 There was also a poster with this nursery rhyme on it:

Sing a song of circles a pocket near your thigh,

Three point one four blackbirds baked in a pi.

When the pi was opened Euler began to sing,

Oh wasn't that a rounded dish to set before the king?