The 2005 Picnic Day Battle of the Bands drew a huge crowd.

The Picnic Day Battle of the Bands is just like a regular Marching Band Battle, except for this extra special rule:

(This is true. The Aggie Band ALWAYS wins or ties. But this is the case in every battle the Band-Uh! fights. The Picnic Day Battle only differs in the number of bands fighting.)

History of the Battle 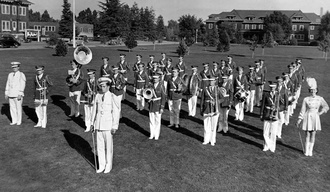 The 1941 Cal Aggie Band on the UC Davis Quad, long before the first Battle of the Bands!

The Battle of the Bands at UC Davis began on a Picnic Day in the early 1970's. As the legend goes, the California Aggie Marching Band-Uh! (All-Male at this time) had just finished marching through the Picnic Day parade for the second time that day, when they witnessed the Cal Band playing on the UC Davis Quad. Seeing that the Cal "Dirty Golden Bear" Band was infringing on their turf, the Aggie Band-Uh! marched onto the Quad and began defending its territory by blasting tunes back at the Dirty Bear Band. Of course, the Aggie Band prevailed, and a tradition was born. 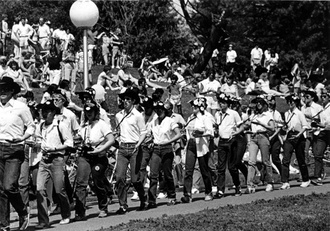 In the years following, more and more bands were invited to the battle. Humboldt, Stanford, other UC's. Even Sac State a time or two! The last several years have included 6 bands, listed below in the 2006 Battle Results. Today thousands of Picnic Day goers spend hours down by Lake Spafford enjoying the spectacle. 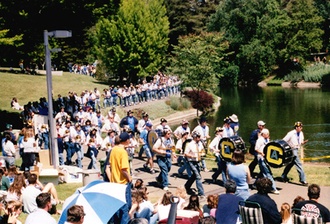 The Aggie Band marching into battle, 2004.

You can read more about the Aggie perspective of the 12-hour battle of 2004 here. 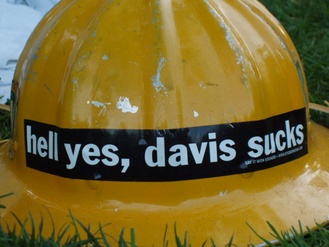 One member from Humboldt State had a hardhat with this to say about the UC Davis Band-uh.