Pigeons are everywhere. This is true. Even in Davis. Not the traditional focus of bird watchers or that spectacular you think. Wrong, they are cool, look here: 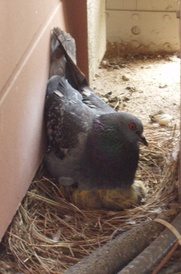 This thing seems to be squishing baby pigeons 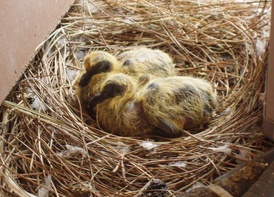 Cute as they may be, pigeons can be just as much as a problem as roof rats, squirrels, deer, bats or other wildlife when their worlds meet ours. Pigeon droppings are a major respiratory and blight problem in urban areas where pigeons have adjusted their roosting habits to modern world structures. Campus' Grounds Division treads a fine line in controlling pigeon populations in an ecologically safe and sensitive manner. One solution found on campus buildings is netting that prevents birds from roosting under eaves and on convenient structural perches. Another solution has been spike strips laid out on horizontal surfaces. And finally, one can spot inflatable owls and hawks on buildings throughout the City of Davis — these false predators are said to frighten away mentally challenged pigeons.

Pigeon netting can be seen on buildings all over campus, like this example on the front of Hutchison Hall. 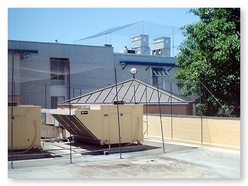 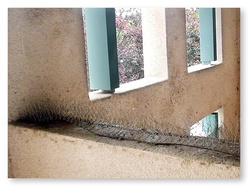