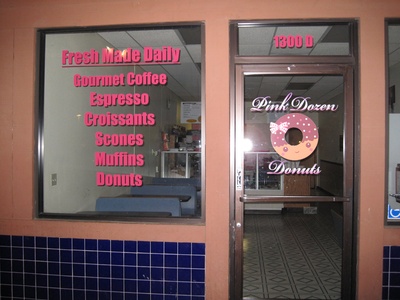 Pink Dozen is a donut (or "doughnut", if you want to get fancy) shop that replaced Variety Donuts. Donuts are fresh made daily; they also sell coffee as well as baked goods such as croissants, scones, and muffins. They continue the Variety Donut tradition of creating jelly donuts by slicing them in half and spreading the jelly in between the halves.

Perhaps the name of the business refers to the ubiquitous pink boxes in which dozens of donuts seem to find themselves.

2011-06-04 09:45:47   One change from Variety is they sometimes have some sort of spectacular creation; I went the other day and saw they had some kind of Oreo dream cupcake. Alas, I had to eat while driving so I passed it up. Does anyone know the story of whether this is in fact a new owner, or is the new girl just the daughter taking over management? —AndrewPotter

2016-04-30 14:53:21   Although I've seen this place forever, since they're sandwiched in between First Lady Nails and Subway, I decided since I was going in early morning to both Supercuts and First Lady, I'd treat myself to a doughnut and coffee. Since I usually limit my doughnut treat to something I pick up at Safeway during a shopping run, I must admit this place was a surprise. The espresso machine was out of order, so I went with regular French 6 with Hazelnut creamer. Niiiice! I always expect some bitterness, but this was definitely as advertised - a gourmet coffee. As to the doughnuts, quite an array. I picked two - an old-fashioned, and a buttermilk, both covered with chocolate. Thickly covered... Although I won't make a habit of it, this is my new go-to doughnut shop! (Although I do need to try their cream-filled, and holes, and...!) —barbararuhmann