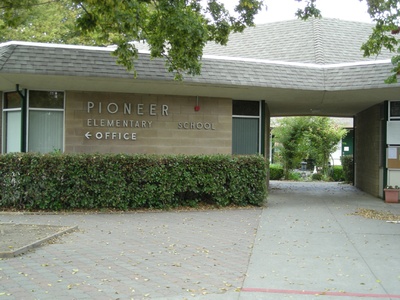 Pioneer School is one of the schools in the Davis Joint Unified School District, and home of the Pioneer Prairie Dogs. Located in South Davis; it adjoins the Pioneer Park.

2010-02-02 21:56:13   I used to go to this school they say Pioneer is "Home of the Prairie Dogs" I remembered this one time when my friends and i found a prairie Dog and some kid went to tell a staff member about it (in a Hey look a Prairie Dog Manner). The staff came back with a bucket of water and poured a bucket of water down the Dog's Hole. the staff members feared rabies. It was a good decision in terms of safety for us kids but a bad decision in terms of the Dog's health. D: —DarkArchon

2017-10-06 19:03:27   I used to go to this school, and I can full well tell you that it's pretty cliquey here. Plus that a bunch of rich kids went here didn't help too much. GATE (or AIM) was pretty fun, I was in it. It did mean you would probably been in the same class with the same people for 2+ years or more. Overall it was a fun school, and the field trips were great. —southdavisperson