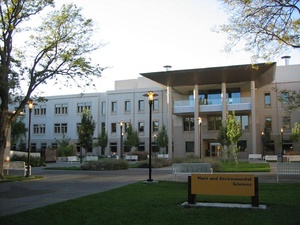 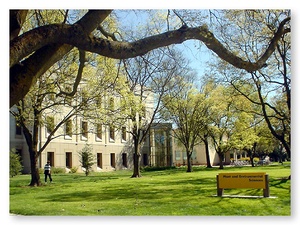 The Salad Bowl Garden, founded by Margaret Lloyd in 2008, is located on the south side, along the walkway to the main entrance to the building. It is an Edible Landscaping demonstration project where the public can pick veggies when ripe. The Spring 2007 crop was tomatoes and peppers.

This building is locked after hours and on weekends so if you take a GIS or related class and need to use the lab after hours plan accordingly.

The building opened in the early 2000s.

"If I was the ASUCD President, I'd read my State of the Association Address from this balcony, like the Emperor of Feudal Japan." —PaulIvanov

The Field Crops of California exhibit rotates through different crops during the year.

Right as you walk in, on the right, there's a tree stump with markings along the rings...

...looking up the markings allows you to put the growth of the tree in perspective with major historical events.