Report a pothole on the Pothole Project page.

The following tale about Davis potholes is a classic urban legend. It is true that the story was (and is) a media item, but the content is false:

Davis came to worldwide attention when former mayor Julie Partansky (then councilmember) argued that the potholes in six alleys in town should not be paved because of their historic significance. (She argued that they were part of the original building materials, and as such were part of the fabric of the neighborhood as it was originally conceived).

Rush Limbaugh carried the story. Late-night talk show hosts carried the story, and CNN broadcast it around the world. The Associated Press picked up the story, reporting "...this is Davis, a town so politically correct that smoking is restricted even outdoors and there are little tunnels under a freeway for frog crossings." 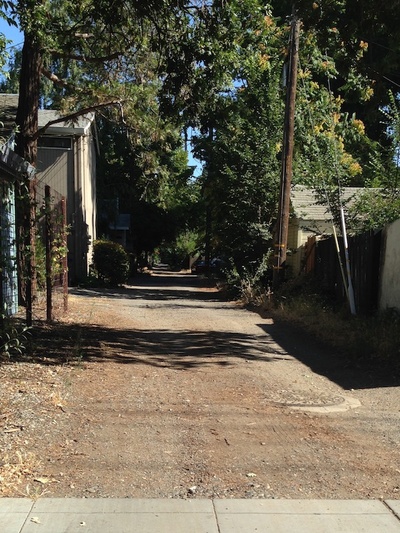 unpaved alley in Davis (no potholes)

The truth is that a Sacramento Bee reporter misunderstood what Mayor Partansky told him in an interview and printed this "historic pothole" myth. Details on this and three associated distorted media reports of 1993-95 (two of which are mentioned just above) that functioned to create the media image of "weird Davis" are available in John Lofland, Davis, Radical Changes, pp. 152-154.

The Davis Enterprise reported that she has suggested that paving alleyways in downtown Davis might 'disturb or destroy historic artifacts', and thus review of these proposed City expenditures by the Historic Resources Commission might be warranted. Her suggestion brought attention to a plan that involved spending money for something that had few supporters among the people who lived along those alleys.

In the minds of a few people, potholes are so associated with Davis now that it's no wonder that the huge dips along West Covell Boulevard went unpaved for so long, causing a thrill ride every time one comes off the freeway and heads for Anderson Road. StevenDaubert says that the city engineers are more than aware [and the potholes have been softened recently] but it will always be a problem due to an aquifer 40 feet below the street. They were repaired in 2008 or 2009. Only time will tell if the repairs last.

River City Bank has signs on sharpened posts that read "This Hole Sponsored by River City Bank". You can see one through their window on E Street.

2006-05-23 14:17:19   Its awesome when your car has a really crappy suspension, so its like a roller coaster. but honestly, I hate potholes. —JulienBiewerElstob

2010-03-14 19:13:36   The potholes (pot-canyons?) on Road 102 between Woodland and Davis have become particularly bad since the rain in January. Does anyone know the appropriate authorities for reporting such things? I worry about my little Toyota losing a wheel :) —AynReyes