The Principles of One Community (POC) are a shared set of principles between the University and the City. POC acknowledges that the University and the City—and those who make up the two—constitute one community. POC is a project initiated by ASUCD Official, Steven D. Lee. POC was initially conceived ruing the 2007 Summer Session. In Fall of 2007 ASUCD President Kareem Salem commissioned an Executive Task Force for the Principles of One Community, chaired by Lee and composed of representatives of the student body, university and city. A signing ceremony was held on Tuesday March 4th at 1:00 in Freeborn Hall.

We affirm that the people of the City of Davis and the students, faculty, and staff of the University of California, Davis constitute one diverse community and strive to sustain one that is united and mutually respectful.

UC Davis and the City are partners in building and shaping our community. Together they seek to nurture, foster, welcome and recognize students, faculty and staff as members of the community. As we celebrate UC Davis’ centennial anniversary and a hundred years of shared history, we reflect upon our past and look toward our future with the following basic principles:

The Executive Task Force that drafted the document consisted of representatives from:

Naturally many joint projects and event are organized and put on in the spirit of the ideals embodied this document. Some events are currently branded as a "Principles of One Community Event" and indeed individuals and groups should feel free to brand their projects/events as such if consistent with the ideals and values of the document. 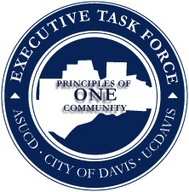 2008-02-29 15:46:36   So, because David isn't representing anyone but himself, he's not allowed to be in the community of people who organized it. That seems highly hypocritical. —BrentLaabs