Someone playing on the fun box

A nice picture - taken from http://www.davistour.com

The public skate park was constructed in 1993 to be used for skateboarding and inline skating. It used to have a locked gate around it to keep kids from skating when it was "closed" (they previously had some civil servant supervising the place) but kids continuously broke through the fence to skate at night. Now they just leave it open all the time; at night the lights are on a timer that may be reset with a buzzer that goes off a few minutes before the lights. Good place to go if you're in the mood for ditching classes at Davis Senior High School. Not that it's ever happened before...

The big bowl has always been notoriously lumpy

Someone came by in the Spring of 2005 and painted checkers all around the bottom of the lip surfaces on the entire park. Looks pretty neat - it'd be nice to see some graffiti art too but no way Davis City is going to allow that these days. Watch out for debris at the park after it rains or if it's windy, or really pretty much all the time. The city can be flaky about blowing the sticks and plant debris off. To be safe, if you think it might be dirty, a towel and a shovel go a long way and help rack up karma points. Helmets are not usually needed, even if a cop comes by (usually to ask you questions about some high school skater that did something) but on days where it's a public festival in the park the DPD hands out $80 helmet violation citations like they're going out of style. Keep in mind that helmets, knee pads, and elbow pads are all technically required when skateboarding the park at any time. Even if the cops choose to let you off, they are well within their authority to write citations for those who lack the proper safety gear. P.S. - Watch out for bikers, they can take over the park if you're not looking even though they are not even legally allowed inside.

When the park was first opened (or, at least as early as 1994) there was an open art policy in the park. As long as you didn't spraypaint anything offensive you could do what you wanted (this didn't last long, however). It was a lot of fun to skate the park when you had a sea of colors.

Coolest thing ever though is when it rains really really hard for a few days, and then, after it stops, sometimes the drains clog, and the whole thing is flooded.. fun to try and bike in.. Oh wow.. that sounds dumb in retrospect, but, oh well, it's Davis, and theres not much to do.. 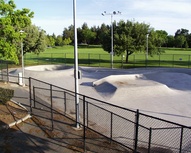 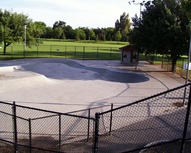 2010-08-06 22:43:40   I'm gonna go with Gabe on this one. I mean, if I skateboarded it's a great place to do some flat ground tricks out without annoying anyone in a parking lot... but there's not much of a box to skate... and the snake run is a joke of a bowl... sad... but I do appreciate that there's enough lighting in the middle of the night to go mess around at the park with —MeganPetersen

2011-04-09 18:01:42   I'm just learning to roller skate, and after falling hard on the uneven bike paths, I remembered the skate park! I like to skate around the edges where it's flat, but I feel like I would definitely be in the way when the place is packed. Typically, I go when most of the students are in school! —lauraAsmith