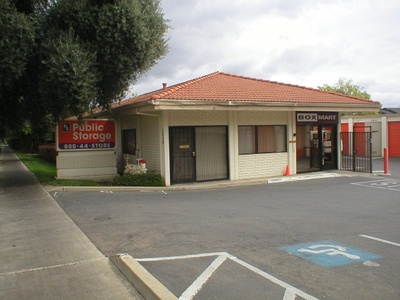 Public Storage runs a national campaign advertising "$1 for the first month's rent!" This offer is intended to appeal to long-term renters; however, because so many students in Davis rent storage units for a short period of time (often during the summer break or over Moving Day), this offer is not available in Davis. Instead, Public Storage offers a discounted first month, along the lines of "half off the first month's rent".

2008-10-02 10:01:54   Beware Public Storage. I took advantage of their "$1 for first month rent" offer, which actually winds up being $40 for a 10x10. I had everything cleared out on the 28th of September. There was nobody in the office, so I left the unit unlocked. Nobody can get the local office on the phone to cancel the account out. And, I've now been billed another $140 for October! Even the district manager's voicemail goes nowhere (as in, I have not gotten a call back). I'm now waiting for the corporate office to "investigate" and hopefully get refunded quickly. If not, I have to dispute the charge... so, learn from my experience and just stay away. —ChristopherPrice

2011-09-20 20:45:09   BEWARE OF THIS COMPANY! Because Public Storage did not repair their roof, two pieces of wooden furniture were ruined when rainwater fell on them. When we contacted Public Storage offices to request them to repair the damaged pieces, they told us that they would deny our claim. We are now taking them to Small Claims Court and it is a hassle. —DavePowell

2011-12-08 13:21:36   This place closes for lunch. A cute little clock stuck to the door with the time they'll return indicated. This should be up in the hours section. I tried calling but you just get menu hell with no option for a real person to actually be helpful. I get there on my lunch break and they are CLOSED! What a waste! —Elisabethal