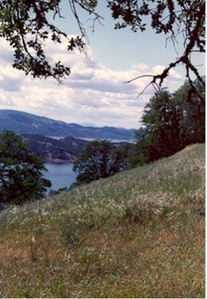 Quail Ridge Wilderness Conservancy lies on a peninsula at the southwest end of Lake Berryessa, in Napa County. It is home to a wide variety of flora and fauna native to California's Inner Coast Range. The reserve's website indicates it is home to black oak, blue oak, interior live oak, oracle oak, scrub oak, and valley oak, as well as about 15 different species of bunchgrasses that are quite rare today—including California's state grass (as of January 1, 2005), nassella pulchra, or Purple Needlegrass. As a relatively pristine wilderness reserve, it is studied by biologists and ecologists. It is one of 36 natural reserves operated by the University of California. Three webcams look out over different parts of the reserve and can be viewed from the link above. They also have several informational videos, listed on their main website.

While the Ridge is not freely open to the public, they offer a free guided walk each month, generally taking place from 2 to 6pm on a Saturday. Those interested in reserving a spot on the walk should call QRWC's Executive Director, Frank Maurer, at (530) 219-4477 (cell) or (530) 758-1387 at least one day in advance. Carpools for the walks leave from the Research Farm between 1 and 2pm, depending on the season.

The 2011 guided walk schedule is as follows:

You can also arrange for private guided walks. They ask for a minimum donation of $200 for a walk for up to 10 people, which will include complimentary wine and finger foods.