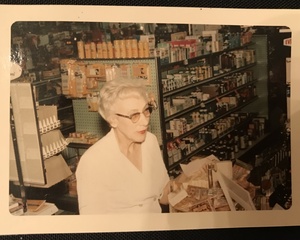 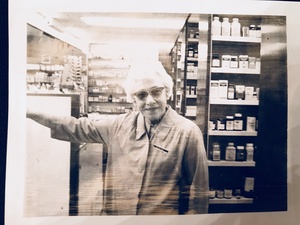 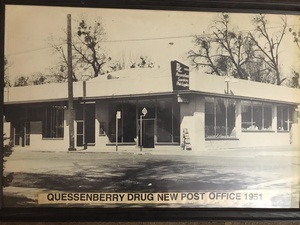 Quessenberry's Drug Store used to be downtown. It has passed into Davis history. It was located on 2nd Street, in the middle of the block between E and F Streets:

. The Avid Reader bookstore now occupies the site. Quessenberry's fell victim to the corporatization of pharmacies, as did the Star Pharmacy (also on 2nd, at the northwest corner of 2nd and D). Originally owned and operated by Clay Quessenberry, the pharmacy continued in business after Quessenberry's death in July 1970, until sometime in the mid-eighties when it finally closed. Jerry Sampo was a longtime pharmacist at Quessenberry's.

Quessenberry's daughter Velma continued to work there until it closed. The Thomas family, who owned a home in Old North Davis, owned Quessenberry's for a time. Woodland's Corner Drugstore on Main Street is an example of the few remaining independent drugstores left in the area.

Quessenberry's is mentioned in a 2014 Davis Enterprise article viewable here.

It is mentioned in a 2013 Davis Enterprise article viewable here.

It is also mentioned in a 2011 Enterprise article here.

I have pictures of the inside of Quesenberrys. My grandmother Elspet McMurtry worked there for years. They used to have a Soda Fountain in the back of the store that served Ice Cream and sandwiches. What I remember most about Quesenberrys was the cheap candy selections. The Varsity Theater used to have kids film festivals where we saw, Pippi Longstocking, Sinbad and other movies. Before the movie we would all run into Quesenberrys and buy 10-25 cent candy, Spree's in the foil packages, Taffy, Jolly Rodger Sticks, Charleston Chews, Wax Bottles, Gold Rush Gum, Necco Waffers, Sugar Daddys, Pixie Sticks, Bottle Caps, etc. Nana always waited on us kids and spoiled us rotten. I remember Jerry Sampo well, he would always tease me and ask if I was married yet, keep in mind that I was 7-8 at the time.

2005-04-10 23:52:59   I miss Quessenberry's! They had a great candy selection, and I used to grab a box or two of candy to take with me to a movie at the Varsity, back when it still showed first-run movies. It was a large, clean, well-lit drugstore with generally friendly employees. —CentralDavisite

2005-07-27 02:09:51   This name looks REALLY familiar...I think I saw an old pic of it hanging at RiteAid? Damnit I know I saw like two or three pics of old downtown Davis, and them specifically pointing out a pharmacy...confirmation anyone? —AndreHarris

2005-10-01 02:52:38   I think it's funny how Corporate establishments try to honor the thing they (or their ilk) distroyed... Look at the Alhambra Theater in Sac and the little tribute to it in the Safeway built atop its site. And there's the little Quessenberry's photo at Rite Aid. I wonder if that exists elsewhere in the area? —JaimeRaba

2008-10-06 09:46:44   I use to work for Jerry Sampo at Quessenberry Drug Store in the late '70s. It was a local Rexall drug store with several counters/departments: 1) The Pharmacy counter/Gift Wrap; 2) The Cosmetics Counter and 3)The Cigarettes, Candy, Film and Watches Main Checkout Counters. The clerks wore blue smocks and we worked very long hours since the store was open 7 days per week.

Back then, we use to deliver prescriptions to our customers in the Quessenberry Opal station wagon and later upgraded to a blue Ford Pinto. This service was free. We use to offer credit to our customers and free gift wrap.

When the kids would flock in to attend a movie at the Varsity Theater, we always sent a clerk to supervise the candy selection process since we didn't have in store video cameras back then.

For me, the job was challenging when we didn't have a male working and a woman appeared in the cosmetics counter. We would usually flip a coin to see who would help her. We use to unpack and stock the inventory and even wash the windows and vacuum. There were only a few male clerks that liked to gift wrap, I was not one of them. The main film counter was the domain of Velda Stanley who worked there for many years. I thought some of the kids were afraid of her which I think helped for store security. She was a very nice woman with many stories and personal advice.

Jerry was a great guy and for many of us, he was our mentor for retail and small business ownership in America. —Martinog