Rather than go out to eat at a restaurant, save some money and eat at home. You could also microwave it. Also check out cookiwiki for a cooking-based wiki. 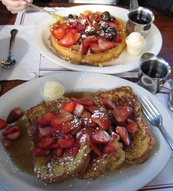 There is no sincerer love than the love of food.

Egg in a Basket (AKA Toad in the Hole, Spit in the Ocean, Egyptian Eye, or Egg and Toast)

To check if butter is hot enough, let a couple drops of water fall into the pan. If the water bubbles, jumps and sizzles, it's ready. Don't let the butter turn brown.

If you're afraid of getting eggshell into your breakfast, break the egg open into a bowl and pour from bowl into pan (fishing out pieces of shell first).

If you didn't mutilate the bread from the middle of the slice when removing it, toss it in the pan and let it cook with the egg.

For crispier toast you should butter the bread before you put it in the pan.

an egg or two

as many corn tostadas

2-3 tablespoons mayo (use the real, unsweetened stuff if you can)

Janelle's MN State Fair Deep Fried Cheese Curds recipe (Not exactly like those at the fair, but close!)

Mix batter (adding beer a bit at a time) until it's a thick liquid consistency. Coat cheese curds in batter and drop into oil (about 375 degrees) about 5 at a time. Cook curds for about 1 minute (until they start to turn golden) and place on paper towel covered plate. Enjoy!

Place the cut cucumbers in a quart jar that has a lid (such as a mason jar). Combine the remaining ingredients in a bowl and stir until the sugar dissolves. Pour the mixture over cucumbers and refrigerate one day before serving. They’ll last for about a week.

Broccoli &/or other vegetables

Sriracha or any other favorite hot sauce

Also, this is not a quick and easy recipe. If you can't boil water, get some help with this one. I'm including it because it's tasty and I would never assume that you can't cook.  ss

2 lbs chicken (I use skinless, boneless breast) cut into pieces

Beef and Beer with Yellow Potatoes

*Blend the peaches, juice and yogurt until smooth. *Pour into popsicle molds, and freeze for about 3-4 hours. (makes about six pops)

Preheat the oven to 350 degrees. Stir the bananas and eggs together in a large bowl. Add the sugar and mix thoroughly. Combine the flour, salt and soda in a separate bowl. Stir to combine, and then add the dry mixture to the large bowl. Stir everything together, and add the chocolate and/or walnuts last. Grease a bread loaf pan (or line with parchment paper) and bake for about 50-60 minutes. Test with a toothpick to make sure it has baked all the way through. Makes one loaf.

Mi Kho (Vietnamese Dry Noodles) Tastes better than it sounds, and has less MSG since most of it is drained off.

Yogurt With Everything -lg

Note: I wasn't sure of the best way to go about this, or if it's even a good idea for the wiki. but sinice many people are too lazy to cook for them selves, I figured i'd have a place for good, easy to cook recipes. i'll add some stuff when i get home. we could also have a page on cooking, although i'm not sure how useful that would be. — arlen

I just want to comment and say what a cool idea! I have tons of my own recipes on my computer that I will glady share. - AshleyOrsaba

Oh! I'm excited! I have a bunch of good recipes to share! — LizaAbeja

2005-02-18 17:43:39   There have been a number of community cookbooks made in Davis. (I've got a Valley Oak one in my kitchen) Perhaps given the number of recipes that could be contributed each one should have its own page linked from here. Would it be worthwhile to have them all share a common format for the title? Maybe "Recipe:Name". Does a new template page for recipes need to be made? —JasonAller

2005-02-18 18:44:39   I like Jasons formatting idea. that way people can comment on individual recipies —ArlenAbraham—— 2005-02-18 19:42:24   I agree.... I was actually thinking about this earlier, while nowhere near a computer (oops, obsession). If people really do put up all their nifty swell recipes, the page will be huge. Plus, if we have individual pages for each recipe, we can add photos. —SummerSong

I don't think that either way is better; it's important that they're all the same, though. It sounds to me that if a page says Recipes:Ghetto Chicken (for example) then there would be multiple recipes for Ghetto Chicken on the page. Alternatively, Recipes:Ghetto Chicken makes sense because the page it links to is called Recipes. In other, totally unrelated news, Miriam just fell over. Oops. —SummerSong

My suggestion: get this page big, THEN make sub pages titled "Recipe: Whatever". —PhilipNeustrom

2005-09-19 18:46:51   Just bringing this page back up into the Recent Changes list in hopes that some more crazy super awesome recipes will be added by you wiki folks. —VivianPham

2006-01-11 11:03:26   here is a cooking tip: chewing gum while chopping onions will prevent you from tearing up... you dont want to look like a baby when you are trying to impress a hot date with your fancy italian casserole do you? —BlakeHarrison