Replaced by the Aggie Card! 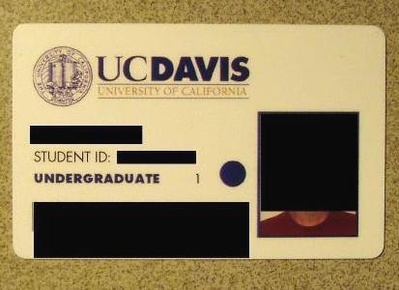 Things you used to get with a Reg Card

Reg Card was an abbreviation for Registration Card, or Student ID. The Reg Card has been replaced by the Aggie Card. This card is practically a necessity and can be used for such things as:

The Front side of the Card

The front of the ID contains the Seal Of The University, the words "University of California; Davis", the student's first and last name, student ID number, ID type ("Undergraduate", "Graduate", "Official", etc), number of times a replacement card has been issued, a barcode and accompanying barcode number, and (optionally) a blue dot to indicate whether the holder has paid ASUCD fees (for Unitrans, etc).

Doesn't the dot color represent what email server you are on? - JenniferChu

Reg Cards are notorious for having distorted, ill-cropped, and overall just bad photos of students. Student ID photos are taken at summer advising. For a few years during the early 2000s photos were submitted by the student via mail prior to 2005. For the best Reg Card photos, make sure you look fabulous at Summer Advising.

The Backside of the Card

The back of the ID contains differing items, depending upon what year the student is. Three years ago the Aggie Logo was on the back. Then the following year that logo was replaced by the UC Davis Principles Of Community. A scannable magnetic (black) strip is on the back of all issued IDs.

A replacement Reg Card can be purchased for $15 in Mrak Hall. They take your picture again and deactivate your old ID. If your card gets damaged, the Registrar's office can give you a replacement for free, however will not let you retake your picture.

*One more thing to mention about Reg Cards: If you lose yours, your life is essentially over until you get it replaced. As a Freshman, losing your Reg Card means you can't eat, you can't get into your dorm and basically you don't exist for the time being. But really, its not that big of a deal. Freshman just get really freaked out when they lose theirs, so its kinda funny to watch.

*As of June 1st, 2005, purchases at any on-campus bookstore require a second form of identification. - EmilyTung

*You can verify any reg card number at https://registrar.ucdavis.edu/validation/index.cfm. This is how petitions are verified by the ASUCD Elections Committee. - JonathonLeathers

UC Davis students had registration cards for a very long time, but they weren't always in their current form. Pre-1996, the Reg Card was a card with a photo glued on and laminated. The photos were typically first taken at summer advising, and had the mag stripe on back so freshmen could access their dorms and DCs.

The use of the digitized photos occurred in March of 1996. All students had to line up at the Rec Hall to get their photo re-taken for the mandatory switchover to the digitized IDs. There was also controversy regarding the involvement of MCI with the switch-over: MCI had assisted the Administration in the technical side of the new cards, and the card doubled as an MCI calling card, with an authorization code on the front and calling card instructions on the back. Some students felt this was unnecessary corporate involvement, and feared that MCI would use their personal information in unwanted ways. There was an additional emotional impact because in order to get the new Reg Card, a student had to surrender their old Reg Card, which sometimes actually had good pictures on them.

The first digitized Reg Cards still had a place to put your Reg Sticker.

A new version of the card called the "Aggie Card" is expected in Fall 2010. This card is a partnership between US Bank and UC Davis. US Bank realized that they could make a profit off of students by adding a debit card feature to student Reg Cards. When you swipe your card to make purchases, US Bank makes money off of interchange fees charged to merchants. So essentially you are giving money to US Bank every time you swipe your card. Merchants such as restaurants and stores get charged these high interchange fees and in the long run stores will pass that cost back to customers in the forms of higher prices. Student get nothing in return. However, it would be more cost effective if students would avoid using the US Bank card and stick with a rewards card from their own credit union or local bank.

* Incoming freshmen get their cards at summer orientation. I don't know about transfer students, but I assume it's at Mrak. - [OmgStarKitty]