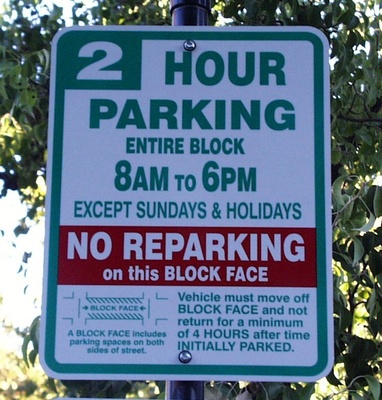 When you are downtown and looking for a place to park be aware of reparking. With the introduction of the new AutoVu system it is now possible to ticket you for moving your car, but not moving it far enough.

Do not be relieved if you find no chalk on your tire. The City now uses digital cameras to track parked cars.

7/28/06 Press Release from the Davis Downtown Business Association The Davis City Council approved an ordinance earlier this year that would limit reparking in the same block on city streets in the Downtown Core. "Reparking", also known as the "2-hour shuffle" or "sleeper parking", refers to the act of moving a vehicle from one parking space to another when the time limit expires. Previously, vehicles need only move one parking space over in order to have been considered "moved". This decreases parking turnover (the number of different vehicles that use a parking space in a given period of time) and deprives businesses of customers, revenue and growth.

Effective August 14, 2006, vehicles parked on the street must move off the block they are parked on when the time limit expires. Vehicles that are parked in a lot or structure must move out of the lot or structure they are parked in when the time limit expires. In a two-hour timed parking zone, vehicles may not return to the same block for at least four hours from the time they first parked there. The "return times" vary by parking zone and are specified on every parking sign.

For the purposes of this ordinance, a block consists of the legal parking spaces on both sides of the street on a block (in which the vehicle is parked), bounded by an intersection at each end. Visitors running short errands are encouraged to use the 20-minute (green curb) parking spaces located throughout the Downtown Core. These spaces and the three-minute (white curb) passenger loading zones are exempt from the reparking restrictions.

Employees are encouraged to purchase "X" and "D" permits that allow them to park all-day in designated permit parking areas, free from the hassle of moving their vehicles. Residential and Commuter permit holders are also exempt from the reparking restrictions when parked in these designated areas.

Installation of new "No Reparking" signage is currently underway. The reparking restrictions will apply to vehicles parked in timed parking zones posted with the "No Reparking" signage, and will be enforced through the use of the AutoFind GPS-enabled automated parking enforcement system that was purchased by the City of Davis last year. Warning notices will be issued by Parking Enforcement for the first two weeks of the program, from July 31 through August 12.

For more information on the reparking restrictions or employee parking permits, contact the Davis Police Department at (530) 747-5400 or visit the Davis Downtown Business Association's reparking web page at http://www.davisdowntown.com/parking/reparkingrestriction.

Other Cities With "Reparking" Restrictions:

2006-08-04 20:46:14   I am hopeful that the reparking restrictions will free up parking to the point of allowing a longer parking period. The shorter 2 hour limits encourage people to drive more than they otherwise would: dry cleaners to bank to coffee shop, etc., due to fears of tickets. I cannot believe they tried to cram so much verbage into the signs. —JaimeRaba