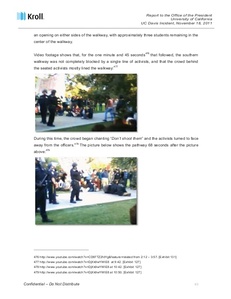 The Reynoso report (named for the chair of the task force that produced the report, Cruz Reynoso) deals with the University's response to Occupy UC Davis on November 18, 2011. It was released at noon on April 11, 2012. The redacted document (keeping police identities confidential) is available for public viewing here on the UC Davis website. The contents were discussed in a townhall meeting held at Freeborn Hall later that day.

The unredacted document can be found here: Reynoso and Kroll reports unredacted.pdf (document is assumed to be copyright by UC Davis)

The report makes recommendations to the administration and the UC Davis Police Department based on a fact-finding report commissioned from Kroll & Associates, a company that is headed by William Bratton (a former LA Police Chief) and staffed by retired police officers. The Kroll Report cost the university $455,879.40, paid from insurance reserves. It assigns major fault to nearly everyone involved for what happened, from the Chancellor to the police on the ground. The much longer and more detailed Kroll report is included as an appendix to the Reynoso report.

The report faults Chancellor Linda Katehi for many, many things. She insisted that the tent removal operation happen at 3 PM instead of the middle of the night like the police requested. The time of day allowed the event to get out of control and it turns out that there were legal problems with arresting people for camping during the day. It faults her for not clearly telling the police that they were not to use force in the operation. Katehi also relied on information she should have known was faulty — in particular, she falsely believed in the face of contrary evidence that most of the campers/protesters were not affiliated with UCD — and did not consider alternatives to removing the tents.

Vice Chancellor John Meyer, who is supposed to have administrative responsibility over UCDPD, was an early advocate for the position that tents on the quad would have to be taken down. He also believed that the deployment of police on Nov. 18 would require the use of physical force and supported this decision. The report states that, "Accordingly, he bears some significant responsibility for the decision to use the police and to risk a confrontation with protesters on Nov. 18."

UC Davis Police Chief Annette Spicuzza's portrayal in the report is the least flattering of anyone mentioned. The report portrays her as a weak leader who did not sufficiently supervise the officers underneath her. During the actual operation on the quad, the report tells us that she looked on and video'd the incident with her iPhone rather than taking charge when it was clear that the situation was not going well. Lieutenant Pike and Lieutenant Swartwood (the incident commander) are portrayed as downright insubordinate and Spicuzza doesn't put her foot down to stop them. For example, she tried to tell the Lieutenants that the officers should not be wearing riot gear, but they replied by calling her suggestion "ridiculous" and proceeded to ignore it. The report also faults her for not standing up to Katehi and telling her that the 3 PM time simply would not work.

Lieutenant John Pike is condemned for his "objectionably unreasonable decision to use pepper spray." The report convincingly proves that the police officers were not in any way trapped and there was no reason for the police to be fearful for their safety. Indeed, two arrested students were taken through the crowd to a police car after the police were "surrounded" but before Pike used pepper spray. (Apparently, there was no communication about the removal of the arrestees, which is one example of the disorganized state of the operation). Pike is also faulted for using an unapproved pepper spray he was not trained to use in a manner inconsistent with the labeling. The choice to use the pepper spray seems to have been completely his own; he also ordered another officer (Alex Lee) to pepper-spray the seated protesters. Pike does come off as sympathetic to some degree for questioning the legal basis of the operation.

The report was the subject of a court case, RG12619930 in Alameda County Superior Court. John Pike and the police union sued to block the release of the report under the theory that the report constituted police personnel records which are confidential under the Police Officers' Bill of Rights. The court dismissed this ridiculous argument and allowed the university to publish the report anyway, before the case even went to trial. Pike and the police union also claimed a right to privacy and insisted that officer names be removed from the report. They also invoked officer safety, claiming that named officers might be harassed like John Pike was. The University, not wanting appeals to delay the release of the report for several months, settled with Pike and agreed to redact police officer names (other than Pike and Spicuzza) from the report in exchange for waiving the right to appeal. The ACLU is considering taking legal action to get access to the full report. Many pages of the report are marked "confidential — do not distribute". But that's just boilerplate stuff from Kroll. The report itself states it is for public release, even if the markings on the same page say it isn't. See also Declaration of John Pike.

On May 23, 2012, the Sacramento Bee and the Los Angeles Times filed suit against the ['UC Board of Regents"] in which they demand the release of police officers' names that were removed from the Reynoso and Kroll Reports — even though many of the names have been identified here and elsewhere for quite some time. The case is Los Angeles Times Communications LLC vs. University of California Board of Regents, 34-2012-80001157-CU-WM-GDS Sacramento County Superior Court. Seems like the Sacramento Bee finally won the case in August 2014, as they have now provided the unredacted version - see above link to download.

Officers on the scene

Since the university has redacted some of the names of the police officers involved from the report after a court battle with John Pike and the police union, we present this incomplete list of officers who are visible in the various photographs and videos taken of the incident.

Officers named in the report, but not on the scene

Table of contents of the report