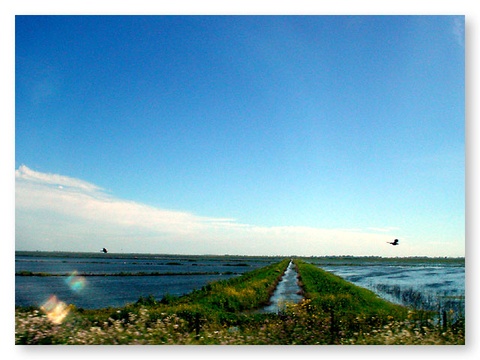 Overwintering birds take flight over the Yolo Bypass, a model project supported by and managed in cooperation with area rice growers.

Although rice paddies more often invoke images of southeast Asia than California, this agricultural endeavor is running strong in Central California. The industry began early in part to feed newly arrived Chinese miners and railroad workers. It continues to thrive today, with more than 95% of California's rice grown in the Sacramento Valley. California is the second most important rice state within the United States, producing about 20% of the nation's crop in a typical year, mainly high-quality, medium grain japonica rice that is favored in Northeast Asia and in parts of the Middle East and Mediterranean region. Rice ranks as our state's ninth most important agricultural export commodity. Japan receives about half the California export total, with California in turn supplying about half of Japan's imports. As many from rice-consuming cultures may be aware, rice in this area is typically harvested in September and October; many bags you see in the stores at this time of year will be labeled new crop and will require less water to prepare. To many cultures, rice is such an important food source that its origin and/or brand is extremely important, and California rice is quite highly esteemed in parts of Asia.

The industry may be of interest to many eco-minded Davisites because it responded to public pressure concerning air and water pollution. Today it has "won over even some of its harshest critics". In addition, it is inextricably intertwined in the tumultuous water-rights/water-usage issues in California. In an arid state with growing pressures on water availability and use, it may surprise many to learn that rice is one of our most water-wise crops, requiring 25 gallons to produce each serving, like oranges, while almonds require 80 gallons per serving [California Rice Commission]. See also Yolo Bypass for an example of shared use with an ecological benefit. See the Sac Bee article for information on a report on California Rice Commission—calling it a "Biotech Model".

As recently as April 2004, however, the California rice industry was faced with political turmoil over a proposal to plant genetically modified rice in the valley. In a $500 million market of which 40% goes to Japan, a country with the world's most stringent policies regarding genetically engineered food, farmers have expressed concerns over public perception toward genetically modified rice. The rice plant causing all the controversy has a seed containing human proteins found in breast milk and tears — the company testing the product claims proteins found in the plant seed could produce medicine used to fight anemia and diarrhea, one of the leading causes of death for children under the age of 5 years. An April 2005 issue of Science published the results of a joint study by researchers at UC Davis, Rutgers, and in China finding that farmers growing genetically modified rice in field trials in China reported higher crop yields, reduced pesticide use, and fewer pesticide related health problems.