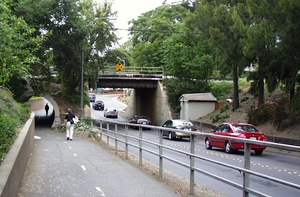 Traveling northbound, the light ahead has turned green.

The view from the downtown side

The Davis Subway, more commonly known as the Richards Underpass, is under the Union Pacific Railroad train tracks. Being a major thoroughfare between Downtown and South Davis and close to Campus and Interstate 80 makes it quite busy much of the day. The fact that there is only one lane going each way doesn't help with congestion, either.

Also in the Underpass is a bike and pedestrian tunnel. The bicycle tunnel recently was turned into a work of town art named Color Study for Cyclists; it has something to do with the spacing/coloring of the lines when coupled with motion.

The underpass, though congested and awkward, is a piece of Davis history. It was built in 1917 and is the last remaining I-beam railroad bridge in use in California. It is a nationally registered historic site. The underpass was part of the Lincoln Highway that stretched from New York to San Francisco. At the northeast side of the underpass stands the equally historic Boy Scout Cabin. It has been the site for the Chamber of Commerce Welcome Sign for many years.

The traffic issues this bottleneck between Downtown and I 80 (basically, the core of Davis and the rest of the world) are a common subject. It is either a source of complaints, or seen as a benevolent gateway that limits what could be a flood of traffic into a small town. The voters of Davis have turned down proposals to widen the Richards underpass four different times. The last such rejection was in 1997 with the defeat of Measure E.

One of the core reasons for the congestion includes development on both sides of the underpass. The addition of Davis Commons/university sponsored housing on the north end, to new apartments/businesses along Olive Drive, doesn't help matters. The city has never really bothered to try to develop another freeway interchange leading into Davis. They had an opportunity when the Pole Line Road overpass was being planned, but chickened out due to opposition from Pole Line residents. Another reason for traffic gripes is that the Richards Underpass is directly connected to The Worst Intersection in Davis.

There is a surveillance camera that watches the underpass for flooding, and a natural gas pipeline that follows the railroad tracks.