Dr. Rick Schubert, 4th Degree (Master Rank) Black Belt in Hapkido, has been studying martial arts for over 40 years and has been teaching Hapkido for over 30 years, including 25 years at the UC Davis Experimental College (from 1994 until its dissolution in 2019) . In addition to teaching Hapkido, he is an award-winning Professor of Philosophy at Cosumnes River College, Sacramento. His approach to Hapkido reflects his expertise in traditional Asian philosophy and his commitment to supporting his students in living balanced, joyful, and peaceful lives. 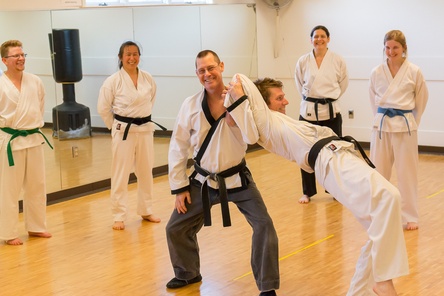 For a sample of his academic work on traditional martial arts, see his paper "Now Who's the Master?" appearing in Martial Arts and Philosophy, eds. Graham Priest and Damon Young, Open Court, Chicago, 2010 and "Ahimsa, Buddhism, and the Martial Arts" appearing in Philosophy and the Martial Arts, eds. Graham Priest and Damon Young, Routledge, London, 2014.  He has also given a TED talk that gives a sense of how one can apply classical Asian philosophy to every-day concerns.

More information on Dr. Schubert and his Hapkido school is available on his instructor page on the Davis Hapkido website.

Does he also teach philosophy during summer sessions? -aec

Yes, Master Rick is also a professor of philosophy. -HaleyKo

I was in his phi east and west class. He's... an... interesting person, with...interesting exampes... -MarieHuynh

I also took his east vs west class (back in... uuh... 1995?). He was very rigorous, and helpful in office hours. It was interesting watching him try to work Harley motorcycles into every example. -AlexPomeranz

The best martial arts instructor I've ever had. -BlancheNonken