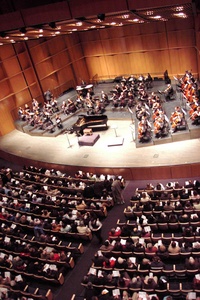 Robert Mondavi (1913 - 2008) was a world renowned wine maker and a pioneer in the worldwide critical recognition of the Napa Valley region wines. His parents immigrated from Italy and founded a wine business on the east coast. In 1966, he moved to the Napa Valley after a family fight with his brother and founded his own vineyards.

Robert and his wife, Margrit, were patrons of the arts and a major contributor to UC Davis. They have donated at least $35 million over the years, and been awarded a UC Davis Medal in recognition. They have a major gallery of art at their home, and have funded the following locations and organizations in Davis: