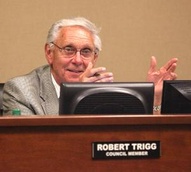 Robert Trigg was superintendent of Davis Joint Unified School District from 1979 to 1983. He then became Superintendent of the Elk Grove Unified School District until 1995. He then served on the California State Board of Education, including as president. In January of 2013 he was appointed to fill a vacancy on the Elk Grove City Council, but chose not to run for election for his seat in November of 2014.