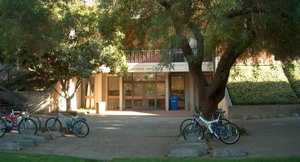 Crouched between Bainer Hall and the Physics Building, Roessler Hall (RESSLR) (pronounced "ross-ler"), consists of two lecture halls on the bottom and a bunch of lab classrooms on the top. It was built in 1971. Practically all Physics 9-Series classes seem to be taught in the north-facing lecture hall (66 Roessler, pictured), and the labs for said classes take place upstairs. The south-facing lecture hall is 55 Roessler.

There is a tunnel between Roessler and the Physics Building (formerly PhysGeo). Take the elevator on the southside to the basement to see for yourself. After exiting the elevator Lecture Support for 55 and 66 will be on your right and the tunnel will be on your left. The tunnel leads to the basement of the Physics Building. There is a woodshop, a metal shop, and a storage room in the hall immediately after exiting the tunnel.

There is an underground hallway between 66 and 55 Roessler. The door is at the front of each classroom on the west side.

According to a Physics Professor, due to the amount of steel in this building, the radio synchronized clock in the room is often wrong. Be careful not to be late for your next class.

Roessler Hall was made famous in the skateboarding world when Andrew Reynolds completed a kickflip down the 28 foot wide ivy gap from the upper level down to the ground level as seen in his "Stay Gold" video part.