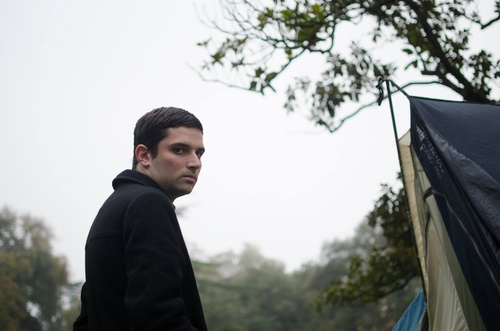 Roman Rivilis was an undergraduate student graduating from UC Davis with a B.A. in Political Science and a minor in Economics. He is from West San Jose, California.

He was involved with a number of campus organizations including Model United Nations at UC Davis and Debate at Davis. He was an Internal Affairs Commission member, serving as a member of the commission since Spring 2012 until he was elected into ASUCD Senate. He is also a brother of the Chi Phi fraternity.

My name is Roman Rivilis and I am a fourth year majoring in Political Science and Economics from the Bay Area. This is my fourth year serving in ASUCD, having been a part of ASUCD’s Internal Affairs Commission since my freshman year to effectively understand ASUCD’s legislative process and its governing documents. I’ve met with UC Davis administration to provide student perspective on accessible technology, and reached out to the Davis community by handling external outreach for the We Are Aggie Pride student philanthropy in order to support students in financial need.

UC Davis has given me some incredible years and more than anything, I want to give back my experience in student government and my dedication to making this campus a better place than when I started. I want my initiatives to be able to foster the growth of the charitable community that has made UC Davis such a fantastic experience for me. 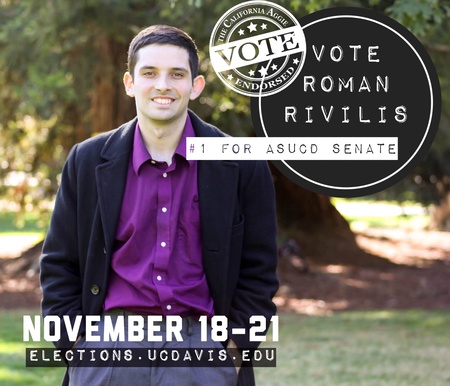 The cost of tuition is expensive. Lots of people take out loans – the average student loan debt nationally is $33,000. Let’s be honest – the debt trap is scary to be caught in, but there’s steps we can take with educating people on the implications of student loan debt. This is why beyond student workshops for financial literacy, we need to reform the infrastructure in place by bringing our vision directly to the administration.

I want to implement a program that puts peer advisors in the Financial Aid Office. I hope to create a space where students can help other students provide information on the loans they intend on taking out, as well as information on scholarships and aid available to them. Every student deserves to know what it means to take out loans, and the affordability of our education should be one of the university’s utmost priorities.

I’ve volunteered at the ASUCD Pantry, an incredible cause that seeks to reduce hunger for as many undergraduate students as possible. Every day, it helps so many students with maintaining food security, but there’s still a lot of work to be done with reaching out to students about donating to its efforts.

As a proud member of Greek Life and a brother in the Chi Phi Fraternity I want to see us all advocate for food security as something that every student deserves, with the help of the extensive philanthropy that comes out of our fraternities and sororities. I want to partner our Greek Life councils with the ASUCD Pantry to promote competitive food drives and space for food barrels across the fraternities and sororities in the city of Davis. By incentivizing charitable giving through our Greek Life from there on, we can reduce campus-wide hunger little by little.

Thousands of test accommodations are given out every quarter, and that’s just the tip of the iceberg. Our campus grows year after year and our administration expects more possibly even thousands more students with disabilities in the next five years, so a more accessible academic space for these is in order. With the support of the Student Disabilities Center, I want to foster the development of a testing center that students can go to should they need a testing accommodation. If I become your next elected ASUCD Senator, I want to include as much student input as possible in shaping the future of this testing center.

My name is Roman Rivilis, and I am a second-year Political Science major from the Bay Area. I want to adapt the association to serve the students more closely. I plan to foster the involvement and opportunities of the student body, in order to further enrich the educational experiences of Davis students as well as sustain the budget needed to support these students. 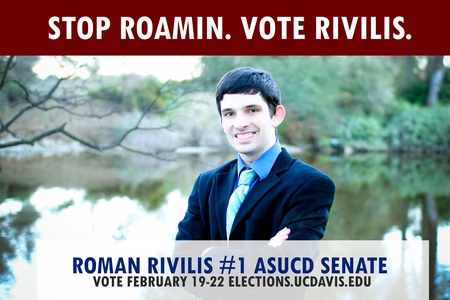 IMPROVE BUSINESS INFRASTRUCTURE ASUCD's budget has been dwindling as of late. Funding primarily goes to units which derive from student fees, but there's no financial mechanism that can effectively accommodate both the ASUCD budget and student fees. Students already have a difficult time affording textbooks, and with the absence of US Bank from the campus, the need of a reliable business unit has escalated. By working with Brett Burns, the ASUCD Business Manager, and contacting the Student Alumni Association, I plan to institutionalize a student and alumni credit union that engages in microcrediting practices, allowing students to withdraw loans to purchase textbooks at low interest rates. ASUCD’s budget can gradually grow in the long run, and students will have financial relief and management experience in the short run.

CONNECT FACULTY TO STUDENT ORGANIZATIONS There are over 1800 faculty members on campus and 25,000 students; this number continues to grow, fostering the need for student organizations throughout UC Davis. There are a diverse range of clubs and organizations on campus, all of which offer great chances for students to get involved, but many of these clubs lack consistent means to communicate with members of faculty willing to support their organization. By collaborating with faculty advisors and ASUCD Outreach Assembly, I plan to organize a sponsorship program that connects members of the faculty with clubs and student organizations. Students will be able to build rapport with faculty and gain valuable internship, networking, and even research opportunities among other advantages by directly networking instructors and other staff with students on campus.

RESTORE THE AS PAPERS AS AN ONLINE UNIT With the passage of the 20/20 Initiative looming over, thousands of students will be expected to pour into the campus over time, increasing the need of on-campus representation and expression. AS Papers, a unit last seen in 2011, provided this representation by comprising over a dozen different publications at the behest of the student body. Unfortunately, misuse of the AS Papers office by the student body rendered a unit an on-campus computer lab, which diminished its use over time until the unit was closed. I plan to collaborate with Alex Park, the Creative Media director, to reinstate AS Papers into an ASUCD-sponsored website that allows for the circulation of numerous campus editorials, increasing the input of opinions presented by the student body and fostering the involvement of a gradual influx of students.

Rivilis completed all three of his Fall 2014 platforms and pursued a range of initiatives within ASUCD and externally to the UC Davis as a whole.

Internally, Rivilis wrote the entire chapter of the ASUCD Bylaws for the Committee on Committees, and wrote several bylaws structuring and defining ASUCD's interaction with the Academic Senate. Using the newly rekindled relationship with UCSA, Rivilis stewarded a successful effort for UC Davis's own Council on Student Affairs and Fees to rejoin the systemwide UC Council on Student Fees - for the first time in over a decade. Rivilis coordinated successful food drives with Intercollegiate Athletics and led a partnership with the Edible Landscaping program in the Arboretum to deliver fresh produce for the ASUCD Pantry, diverted unused bikes from TAPS and unsold course materials from UC Davis Bookstore to the Aggie Reuse Store, and organized a relationship between the ASUCD Office of Advocacy and Student Representation and Davis Faculty Association.

Externally, Rivilis started the first on campus designated nap site in the Student Recruitment and Retention Center, coordinated Yolo County resources to grow the campus mental health services, advised IT staff on revisions and updates to myUCDavis and Schedule Builder, restored access to testing materials at residence hall area convenience stores, conducted a lighting survey to address lighting deficiencies throughout campus, organized gatherings between ASUCD as well as the regional elected offices in Davis and Yolo County and various other successful projects.

Rivilis maintained correspondence with the student body through routine updates on his projects and platforms often posted on Facebook. His updates were posted at a monthly pace, used to fulfill a commitment to the public trust.