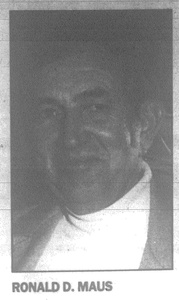 Ronald Maus, DJUSD Trustee, 1962-1973Ronald Maus (born 16 Dec. 1923, Sacramento, CA; died 10 March, 1994, Sacramento, CA) served as Trustee for the Davis JUSD School Board from 1962 to 1973. He ran for school board again unsuccessfully in 1975. Maus graduated from Oroville High School in 1942, attended UC Berkeley until he joined the U.S. Army.  In WWII he participated in the D-Day landing at Normandy and the Battle of the Bulge.  At the end of WWII, he returned to UC Berkeley and finished his undergraduate in 1950.   Maus was an accountant at UC Davis for 33 years when he retired in 1984.