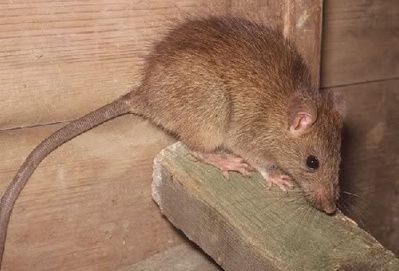 Roof rats can be light gray to dark black. The roof rat's scientific name is Rattus rattus and is one of at least two introduced rats that occurs in California, the other being the Norway rat (Rattus norvegicus). The Gambian pouch rat (Cricetomys gambianus) of Florida has not yet established itself in California. Roof rats were common on early sailing ships and apparently arrived in this country by that route. This rat has a long record as a carrier of plague, aka black death (see Eric Burdon & The Animals: The Black Death from Winds of Change album). Sometimes confused with mice.

Three subspecies of Rattus rattus have been named, generally identified by their fur color:

Crossbreeding between subspecies has often occurred, resulting in unreliability in identification by color. Roof rats are typically 13"-18" long, including the tail, which is longer than the rest of its body - it is this long tail that most readily distinguishes the Roof Rat from the Norway Rat, our other commonly found rat. Roof rats are sleek, slender, agile, and have large ears.

Regarding environment, the roof rat is apparently not quite as adaptable as the Norway rat, and its geographic distribution suggests it to be more suited to tropical and semi-tropical climates similar to the Mediterranean climate we have here in Davis. Roof rats are more aerial than Norway rats in their habitat selection and often will live in trees or on vine covered fences. Landscaped residential or industrial areas provide good habitat, as does vegetation of riverbanks and streams. They will often move into citrus groves, around poultry, farm buildings, and industrial sites where food and shelter are available. Being agile climbers, roof rats frequently enter buildings from the roof or accesses near utility lines which they use to travel from area to area; they have been found in sewer systems, but this is uncommon.

Roof rats, like our tree squirrels, like a wide variety of fruit and nuts including those of our prized ornamental and landscape plants. Davis' large squirrel population may provide some measure of the size of our roof rat population. Like mice, squirrels and most other rodents, roof rats are omnivorous and will hunt for food. At the Cosumnes River Preserve south of Sacramento, roof rats have been shown to be feeding upon the eggs and hatchlings of native perching birds and waterfowl. It is likely they could be damaging the bird population in Davis as well. However, tit for tat, the enormous number of barn owls in town, as well as feral cats, prey on the rats.

In Davis, nocturnal roof rats can often be seen scurrying across phone lines, along fence lines, criss-crossing an aerial highway of tree limbs, and heard scuffling with their brethren. 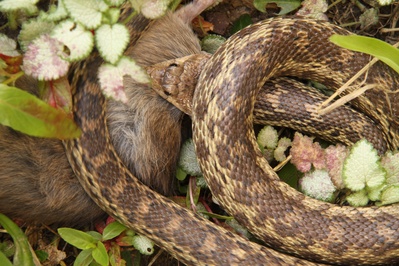 One of the most effective strategies to control roof rats is to eliminate potential nesting and breeding areas. You don't have to resort to poison, cats or even humane traps as often if you help keep their total numbers down by discouraging their breeding. Roof rats prefer shaded areas with standing water and a ready food source (they are omnivorous). Specific actions that can be taken include:

There are Norway rats that have grown to the size of medium cats, they tend to reside around DHS, and there are reports of them attacking cats.

2007-10-11 22:21:34   Our condos just recently had a rat problem. I bought poison but never used it since the rats could potentially die anywhere in the house after ingesting it. Set out traps and caught two mice. Sealed up holes. I would say they are more annoying than roaches and ants. Has anyone had to call an exterminator for rats? —CarlosOverstreet

2007-11-12 10:14:01   Cats are great at helping control the rat population, especially former ferals that aren't completely socialable, consider getting one if you have a rat problem. —FeralFeline

2009-08-31 12:03:15   Rats are nasty and are everywhere in downtown Davis. We moved into a 600 sf cottage in downtown Davis and our first night, the rats in the walls/attic were so loud I couldn't sleep without turning on the fan for white noise! What a nightmare! Thankfully, since it was an existing condition we quickly made the land lord aware of (and a violation of California's Habitability laws for rental units - but he knew that so we didn't have to tell him), the land lord immediately called and hired (he even paid for the initial installment - which was pretty cool), a pest control service. Over then next few weeks we trapped probably 20 rats and 10 mice. All our food is in rat-proof boxes and our house/yard really clean. Our neighbors have them too!

Thankfully they are now gone and we can sleep soundly. Good luck! —RachelCat

2009-10-23 23:44:12   When I use to work at Blockbuster downtown, our whole computer system was ruined for about a week because those suckers chewed through our wiring. It was hell cuz I had to stay to 3am some nights because I couldn't leave my manager alone while she talked, and most of the time put on hold, by the computer assistant company. We couldn't close the computers, run purchases, or even clock out. It was seriously out of those horror films when its the middle of the night, dead downtown, dead quiet...except for the constant "scratch scratch" of those rats chewing through the walls. You could even hear them fighting one another. I remember they would run out across the floor and our customers (usually their kids) would see them and freak out. Sometimes it was amusing like how we couldn't figure out when out of all the candy and food we had displayed, they would only open/eat the trail mix bags...or hear my manager curse her head off cuz one just ran under her feet. My assistant manager enjoyed it though cuz he got to "dispose" of them, mafia style, if you know what I mean...hahahaha. —allwalksoflife87

2010-10-12 20:43:55   I had a major problem with a very smart rat in my attic. After baiting the trap with peanut butter initially, I switched to a piece of Snickers bar and was successful. Apparently, the caramel sticks to the trip lever and attempts to pull it away set off the trap. —RMS

2012-08-12 10:02:38   When we lived downtown about 11 years ago, we had a roof rat probelm. Our landlord, who had a huge cat and lived next door, set the cat in the attic for a short time. The cat had a field day! Then to get rid of the rest of the rats, the landlord put traps up there. The traps went off evry 20 mins or so for a day and after that they were gone forever. —jsbmeb