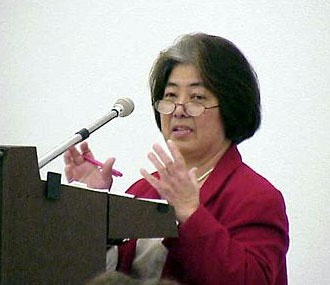 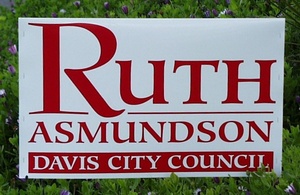 Dr. Ruth Uy Asmundson is a political moderate who served as Mayor of the City of Davis until June 2010. She was first elected to the City Council in 2002 and then reelected in 2006. She served as Mayor Pro Tem from 2006 to 2008.

Ruth Asmundson is the widow of Vigfus A. Asmundson, former Mayor of Davis and son of the UC Davis professor for whom Asmundson Hall is named — theirs is the only recorded instance in which both husband and wife have held the mayoral seat in Davis. Dr. Asmundson married Vigfus A. Asmundson during his term as city mayor, and has lived in Davis since at least 1973. She has six children, all college graduates: Alinia, Irena, Wilfred, Vigdis, Jonas and Sigrid.

Asmundson showed questionable leadership during the Aug. 23 city meeting about spraying for West Nile Virus when angry citizens overthrew the meeting because the format - people write questions and the mayor chooses which ones get read - was too strict. Asmundson left and ordered the panel of experts to leave because she didn't like being shouted at. Asmundson later said that there wouldn't be anymore meetings because this one had left her feeling "embarrassed and disillusioned and frustrated".

Ruth did not endorse anyone for the February 2008 Primary Election, but was supportive of the Democratic Party.

2006-03-18 03:42:38   Asmundson is "comfortable with the procedure we followed" in Buzayan case. I think anybody who takes a good look at it will see that she is very wrong to be comfortable with the procedure the police followed here. Phil and I have both written to her in protest of her support for this obvious misconduct and I hope a lot of other citizens will too. —KenjiYamada

We need to be Ruthless!!! — WilyFerret