Welcome to the SO HOT! Campaign 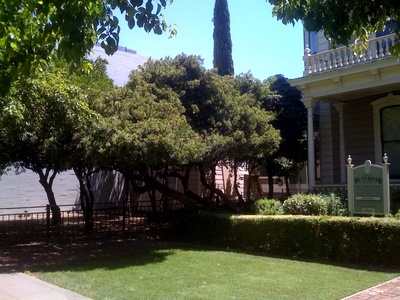 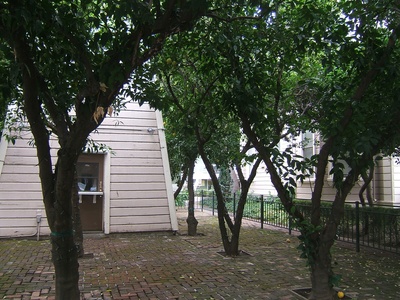 Please help to Save Our Historic Orange Trees today...

2. Contact everyone you know in Davis who is registered to vote and ask them to sign the petition too.

4. Write a letter to the editor:

For example... Dear City Council Members of Davis, It has recently come to my attention that there is a planned destruction of a historic orange tree grove at 604 Second Street. This is a concern to me both because of the loss of trees and public use open space. As a tree commissioner of Davis, I consider it my responsibility to protect the Davis urban forest and to speak out when witnessing actions that go against city polity to preserve open spaces. I hope that the city will rescind this planned destruction keeping in mind that it is in everyone's best interest to increase the amount of oxygen in the air, not the concrete in our environment nor the caffeine in our bodies. If you are a concerned registered voter in Davis, please join the SO HOT! campaign to Save Our Historic Orange Trees! and check the Wiki for more information. With hopes for magical transformation, Rainbow Vogt, PhD Davis Tree Commissioner Sign petition to protect trees at: http://www.PetitionOnline.com/SOHOT/

4. Get involved and spread the word: We will be at events around town this week. Tuesday- Varsity collecting signatures at 5P for bike film festival at 6:30 Wednesday- Farmer's Market tabling Thursday and Friday— music at the trees? Please contact me if you are interested in getting involved: Rainbow at 530.574.2652

2009-05-27 11:54:40   Thee proposed plan is to build a 2-story building housing Mishka's at the bottom and city offices on the second floor. As of May 27th, none of the trees are being transplanted. It was considered a while back but transplanting, potential for survival, and loss of additional street trees to move them were considered too costly.

Meanwhile, the city of Davis is paying the following for this project:

2009-05-28 13:45:40   Info about the project proposal can be found in the final EIR (http://cityofdavis.org/cdd/MishkaCafe/). The EIR site also has links to historic documents regarding the Mansion Square development- which mention saving as many orchard trees and as much existing landscaping as possible as part of the mitigation measure for that development (http://cityofdavis.org/cdd/MishkaCafe/pdfs/Chapters/XFAF-BackgroundDocs_Davis.pdf)- and the original nomination form to place the mansion on the National Register- which mentions both the orange tree grove and tank house as contributing elements (http://cityofdavis.org/cdd/MishkaCafe/pdfs/Chapters/XFAH-NominationForms_Davis.pdf). The plan for the tankhouse is to relocate it to the west side of the mansion.

Additional info can also be found in the 11/05/08 City Council meeting Staff Report (http://cityofdavis.org/meetings/councilpackets/20081105/06-CC_&_02-RDA_Hunt_Boyer_Tankhouse.pdf). This includes the ground lease agreement for Mishka's and an annual rent table (which starts at $3,600 per year- or $300 per month- for year 1).

Finally, info on the Landmark Tree status of the orange grove can be found in the 12/09/08 City Council packet (http://cityofdavis.org/meetings/councilpackets/20081209/03-F_Landmark_Trees.pdf). The City Council voted unanimously to designate the trees as Landmarks (as did the Tree Commission). The City's policy on Landmark trees (as stated in the Core Area Specific Plan) is: "Landmark Trees shall be preserved to the greatest extent possible. Trees of Significance and significant other trees shall be retained whenever possible" (p. 67, http://cityofdavis.org/cdd/pdfs/planning/Core-Area-Specific-Plan.pdf). —em

To anyone who has tasted one of the sweet navel oranges, enjoyed the fragrant smell of the orange blossoms or simply taken pleasure in walking by the historic orange tree grove nestled between the Dresbach-Hunt-Boyer mansion and the Varsity theatre in downtown Davis, this is your chance to say goodbye. As early as June, ten historic orange trees are to be cut down to make room for the construction of a two-story building on the mansion’s property at 604 2nd street. The new development will house Mishka’s Café on the ground floor with offices above. The tank house, which currently shares the brick patio with the orange trees, will be relocated to the West side of the house. Demolition of the site is expected to begin this month or next. The mansion itself was built in 1875 by one of Davis’ original settlers, William Dresbach. The orange trees were estimated to have been planted by the eighth owner of the house, John Hunt, around the turn of the 20th century. The property was once home to a much larger orchard, with orange, almond, fig, lemon, peach, apricot, plum and walnut trees, but a majority were cut down to make room for the Mansion Square development in 1979. Twelve orange trees were saved, serving as a visual reminder of the orchards and gardens that once surrounded the mansion. This past December, the century-old orange trees were officially granted Landmark Tree status due to their age and historical significance. The orange trees, as well as the tank house and gardens, were previously recognized as contributing elements towards the mansion’s listing on the National Register of Historic Places. The mansion property is also listed on city, county and state historic resources lists. The site is currently owned by the city’s Redevelopment Agency (RDA) which considers the vacancy of the tank house as a “blighting factor that contribute(s) to a public perception of a failing downtown and increase(s) likelihood of vandalism.” In 2007, the RDA approved alternative 3 of the Mishka’s Café project, Disassemble/Reassemble and Rehabilitate the Tank House and Construct New Two-Story Building, and, in 2008, the City Council approved a resolution for a ground lease between the RDA and Otpisani, LLC. The RDA has spent $85,000 on the project thus far and will be spending an additional $315,000 to complete the project as planned. The RDA will lease the property to Otpisani LLC and, according to the ground lease agreement, basic rent will start at $3,600 per year (or $300 per month), increasing to $11,707 per year by year 10 and $40,239 per year by year 60. The proposed Mishka’s Café project underwent an extensive Environmental Impact Review (EIR) process which highlighted many significant and unavoidable impacts. The EIR recognized that “removal of the orange trees and loss of open space around the Mansion would result in a significant impact on the historic setting.” The EIR also refers to the City’s Core Area Specific Plan which states that “Landmark Trees must be preserved to the greatest extent possible. Trees of Significance and significant other trees must be retained whenever possible.” Despite the significant and unavoidable impacts of the project, including Impact on Landmark Trees, Loss or alteration of the historic setting of a National Register Property, and Cumulative loss of cultural resources, and the fact that the project is inconsistent with parts of the city’s General Plan and Core Area Specific Plan, the RDA approved the project and construction is scheduled to begin sometime in the next year. by Emily Meharg

Mishka's Café in downtown Davis will be moving down the street by mid-February, despite opposition from some community members.

Since the development agreement was signed five and a half years ago with the city, owner Sinisa Novakovic has been going through a process of approvals and plans.

Originally founded in 1995, the café will move from its current 2nd Street location between D and E Street to one block over between E and F Street. The new Mishka's will occupy the first floor of a new two-story building next to the Varsity Theatre. The second story will be used as office space.

Novakovic said the new café will have about a 25 percent capacity increase, with 15 to 20 more seats. Other changes include expanding its collection of tea to about 175 different types.

"One of the biggest problems with the current location is that the café is full to the point that a lot of people cannot find seats," Novakovic said. "The move is going to be wild and crazy. We're hoping to close one night and be open the next morning at the new location."

Novakovic said that he expects the new location to be pretty busy when the café opens, so he may do some more hiring. He said that there is currently an inch stack of resumes for the café to go through before considering other applicants.

The lot where the new Mishka's will be located was the site of the Tank House since 1979. The Tank House was built in the late 1800s to supply water for the adjacent Dresbach-Hunt-Boyer Mansion and its grounds. The Tank House was used as commercial space from 1979 until 1998, when it was condemned for being structurally unsound. It has not been used since.

The original proposal was to demolish the Tank House, but instead it was moved south, to the western side of the mansion. This did not sit well with some Davis residents.

City Councilmember Steve Souza was opposed to the relocation of the Tank House, but does like the Novakovics' design for the new café.

"There were better proposals for what to do with the building," Souza said. "There was a wonderful open air looking design that could have utilized the Tank House. The new design looks great and we're happy we retained the land underneath the building because it is the people's land and we will continue to own the land."

Souza said the only problem he sees now is the Tank House's proximity to the Hunter-Boyer Mansion.

"One of the problems I saw was it's really close to the mansion," Souza said. "It's a waste of some of the historical features of the mansion; it blocks it. It would be more appropriate if the house was to the back of the property."

UC Santa Cruz student and Davis native Luke Slotton said he comes into the café three times a week when he is in town.

"At first I was ambivalent," Slotton said. "My only qualm was that the move would be imposing on one of the historic parts of Davis. It is one of the old, awesome spots and it was hard to see it being uprooted. I do think it's for a good cause, though."

Rainbow Vogt, member of the city's tree commission and resident of Davis, had other objections to the Tank House's move. Vogt supported preserving orange trees next to location of the new Mishka's and said she feels it is unfortunate that trees were removed.

"The trees are a symbol of all of the orchards that once stood on the Hunt-Boyer property. The new buildings plans wouldn't have required removal, but all were removed. Part of whole issue is that a landmark tree doesn't mean much. [It is] so unfortunate and unnecessary to have lost the trees."